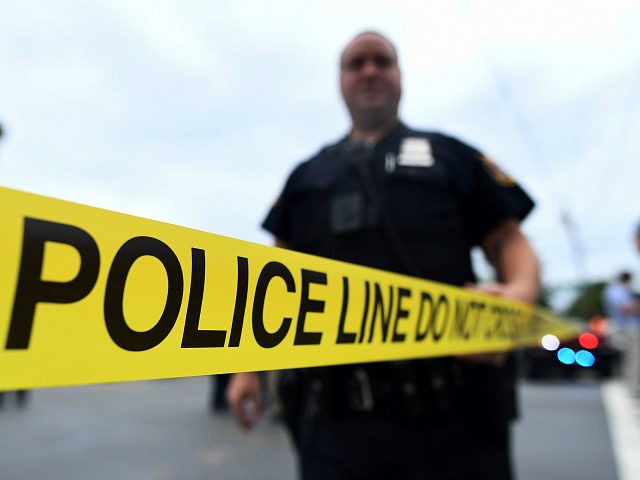 Police are searching for a man who allegedly fired a gun at a 16-year-old on a Queens sidewalk Sunday, hitting him in the leg.
The incident happened at Merrick Boulevard near 111th Avenue in Jamaica at approximately 2:20 p.m., officers said, according to PIX 11.
“The unidentified man approached the teenager with a gun before shooting him in the right leg,” the outlet stated.
The New York City Police Department’s (NYPD) Crime Stoppers posted the surveillance footage Monday evening showing the man wearing a dark shirt and ripped up pants chase the teen around a brick column.
Moments later, the teenager ran away and the man appeared to shoot at him:

The victim was later transported to a local hospital.
“The victim suffered non-life-threatening injuries, but, according to sources, has not been cooperative with investigators,” the New York Post reported.
Meanwhile, Breitbart News reported July 6, New York Gov. Andrew Cuomo (D) announced the launch of the Office of Gun Violence Prevention.
“The office is part of Cuomo’s effort to flatten the curve of gun violence, which is raging in New York City despite the state’s stringent gun controls,” the article said:

Cuomo also announced the creation of the Office of Gun Violence Prevention, which “will be overseen by the New York State Department of Health and led by a Governor-appointed Gun Violence Prevention Coordinator who will coordinate an all-of-government approach to ensure that state and local programs are advancing unified gun violence prevention strategies.”
He also noted that a “Gun Trafficking Interdiction Unit within the New York State Police” is being launched. The focus of the trafficking interdiction unit will be on guns from out of state.

Blaming guns from outside his state has for a long time been one of Cuomo’s talking points, the outlet said.
“On September 17, 2015, he suggested New York’s surging gun violence was not his fault or proof of the failure of gun control, but was the fault of states ‘down south,’” the report concluded.

Shooting Under Investigation In Portsmouth Virginia

Nearly three weeks after the Idaho student murders shocked the college town of Moscow, investigators have backtracked on some of END_OF_DOCUMENT_TOKEN_TO_BE_REPLACED