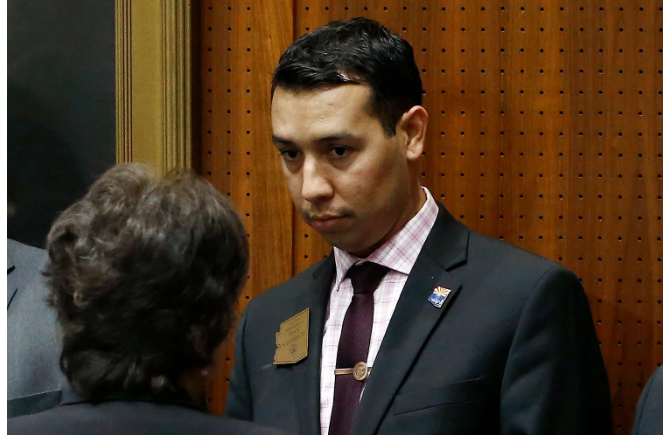 Navarrete could face a mandatory minimum sentence of 49 years in prison if convicted of all charges, according to prosecutors

An Arizona state senator has resigned after his arrest last week on child sex abuse charges.

Otoniel “Tony” Navarrete, 35, submitted a brief letter of resignation to Arizona Senate President Karen Fann on Tuesday, five days after the Phoenix Democrat was arrested on seven felony charges, according to the Arizona Republic.

“Effective immediately, I am officially resigning my post as Arizona State Senator for District 30,” Navarrete wrote in his written statement to Fann.
In a separate public statement, Navarrete maintained his innocence and “adamantly” denied the charges filed against him. He promised to “pursue all avenues” in order to clear his name.
“While I would love nothing more than to continue to serve the families of Arizona’s 30th District, I worry it will be impossible to give my constituents the full attention they deserve. Therefore, I must resign my post as Arizona State Senator today,” he said. “This was the right thing to do considering the serious allegations,” Fann and Rios said in another joint statement on Tuesday following Navarette’s resignation. “We know that the Arizona Judicial Branch will deliver justice and pray for healing and support of all victims.”
According to a police report, a 16-year-old boy contacted police last Wednesday and spoke with detectives who documented the alleged abuse, the Washington Post reported Wednesday. The teen said Navarrete first molested him at a home in Phoenix when he was 12 or 13 years old. The abuse allegedly continued until he was 15. The next day, another 13-year-old boy told investigators that Navarrete had once tried to touch his genitals.
Navarrete stated he “wasn’t well” when confronted with the child sex abuse allegations, per the report.
Navarrete, who became a state senator in 2018, did not enter a plea during his initial court appearance on Friday. He was released Saturday after posting a $50,000 bond.

Navarrete could face a mandatory minimum sentence of 49 years in prison if convicted of all charges, according to prosecutors.
On Monday, Republican Senator Kelly Townsend filed a complaint with the Senate Ethics Committee in which she requested an investigation into whether anyone at the state Capitol or other state government agency was aware of the allegations against Navarrete before his arrest.

Related Topics:ArizonacrimeFeaturedNavarreteSexual abuse
Up Next

Alex Murdaugh apparently met with his lawyer, law partners, and relatives for a meeting three days after the murders of END_OF_DOCUMENT_TOKEN_TO_BE_REPLACED