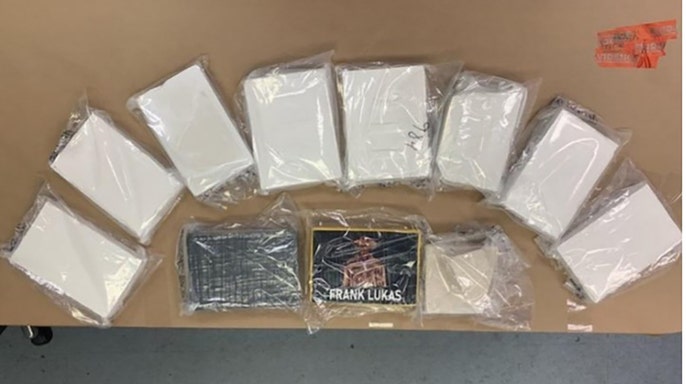 Detectives in Forsyth County, North Carolina, have seized over $2.6 million of fentanyl – enough of the deadly drug to kill 5 million people – in the largest bust in the county’s history, authorities said last week.

The seizure was part of an ongoing investigation that began in September 2021 when the Forsyth County Drug Task Force learned that 31-year-old Lakeith Rayvon Lindsay, of Winston-Salem, may be distributing narcotics throughout the county, the Forsyth County Sheriff’s Office said Wednesday.

After further investigation, detectives were able to obtain a search warrant for a residence on Autumn Mist Drive in Winston-Salem.

Detectives seized 22 pounds of fentanyl with an estimated street value of approximately $2,665,000, the sheriff’s office said.

Three kilograms of marijuana, two firearms, various drug paraphernalia, including a kilo drug press and heat sealer, and $4,000 in cash were also seized, according to authorities.

Lindsay was arrested and charged with felony trafficking a schedule 1 drug, felony possession of a firearm by a felon, felony maintaining a dwelling for a controlled substance and misdemeanor possession of drug paraphernalia.

Lindsay was being held in the Forsyth County Law Enforcement Detention Center with no bond.

Related Topics:crimeDrugsFentanylNorth Carolina
Up Next

On this episode of “Prime Crime with Jesse Weber,” he takes us through the bizarre case of Anthony Todt, a END_OF_DOCUMENT_TOKEN_TO_BE_REPLACED

Andrew Tate and his brother, Tristan, were arrested in Romania a month ago for allegations of human trafficking and organized END_OF_DOCUMENT_TOKEN_TO_BE_REPLACED