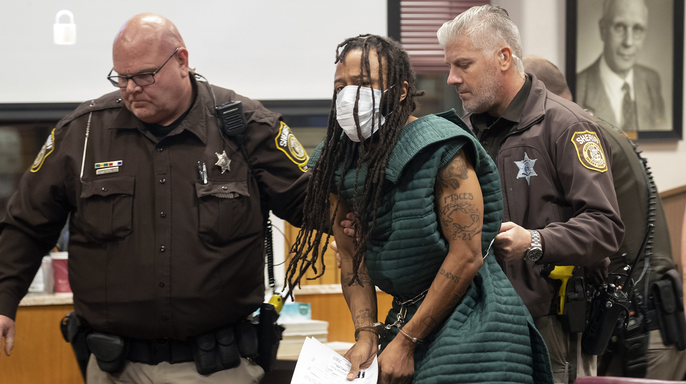 Waukesha resident and parade victim Kimberlee Coronado on how a community comes together in a time of loss following the shooting that took place outside of Chicago.

Darrell Brooks Jr., the Wisconsin man accused of plowing an SUV through the Waukesha Christmas Parade last year, killing six and injuring dozens, returned to court Monday for a hearing.

The jury status hearing, less than a month before his case is expected to go to trial, kicked off around 2 p.m. Both sides agreed on what video evidence could be introduced during the trial, according to court documents, and that the dozens of people who recorded videos of the mayhem expected to be used as evidence do not all need to show up in court for their images to be introduced.

The trial is expected to take some time, based on the sheer number of charges in Brooks’ 83-count indictment.

Waukesha District Attorney Sue Opper told the judge that prosecutors expected to wrap up their case between five and seven days.

At one point, Brooks was seen fidgeting in his chair as the prosecutor asked the judge for him to be forced to remove his coronavirus facemask throughout the trial, video shows.

Brooks’ jury trial is scheduled to begin in October on an 83-count indictment that includes six homicides and dozens of other felonies for a rampage attack that killed Jackson Sparks, 8; Tamara Durand, 52; Jane Kulich, 52; LeAnna Owen, 71; Virginia Sorenson, 79; and Wilhelm, 81. Dozens more were injured.

Brooks has history of violent crime stretching back to 1999 – and was out on bail at the time of the massacre after allegedly running over his ex with the same red Ford SUV he allegedly used to mow down more than 70 parade-goers on Nov. 21.

Brooks’ ex-girlfriend told police after the tragedy that he had been fighting with her minutes before the parade horror and that he gave her a black eye and a split lip, hitting her while they were in the car together. At the time, he was out on bail for allegedly punching the same woman in the face and running her down with the same vehicle on Nov. 2 – and also for the incident with his nephew. He also had an active warrant out of Nevada for skipping court on sex crime charges.

In Brooks’ only remarks from behind bars, he told Fox News Digital that he felt “demonized” and “dehumanized” following his arrest.

Brooks has been in and out of criminal court for more than two decades, serving time in prison and racking up convictions for domestic violence, child sex crimes, firearms, drugs and battery.

He now faces life imprisonment if convicted on any of the first-degree intentional homicide charges.