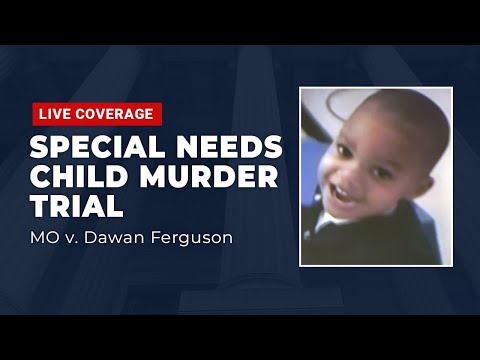 A Missouri man is on trial for allegedly murdering his vulnerable young son to make room for his own polyamorous lifestyle. Dawan Ferguson, 49, faces a murder case years after Christian Ferguson, 9, disappeared and presumably died.

Young Christian lived with a catastrophic, rare disorder that made it so he couldn’t process protein, interfering with his ability to walk and talk. He needed the right medication or he would die within 48 hours, according to The St. Louis Post-Dispatch.

The child was last seen with his father leaving home on June 11, 2003. Dawan Ferguson would call 911, claiming a carjacker took his maroon 1999 Ford Expedition, according to The Post-Dispatch. Christian was inside the vehicle, he said. The search continued for years to no avail. Authorities in St. Louis County, Missouri, finally pressed charges against the father in 2019. Police have reportedly said there were inconsistencies around his 911 call, such as a resident in the city of Ferguson saying the SUV was parked there through the time of the 911 call. Ferguson also had a cellphone when he made the 911 call from a pay phone, officials said, noting another one of the alleged inconsistencies.

Officials have argued that Dawan killed his son Christian because the child needed a lot of medical care. That care interfered with defendant Ferguson’s polyamorous lifestyle, authorities said. He had full custody of the child at the time and married to another woman who was not Christian’s mother. At least two women are expected to testify that Dawan told them he killed Christian, according to the Post-Dispatch. A sister of the missing child may also testify about going to police in 2018, claiming to hear her brother killed at their home in 2003.

Monica Ferguson filed to divorce Dawan after 18 years of marriage shortly before he was charged in Christian’s death. She claimed he had sexually abused two relatives. Authorities pursued a separate sex crimes case for alleged incidents from between 2000 and 2013.
#ChristianFerguson #DawanFerguson #LawAndCrimeNetwrk