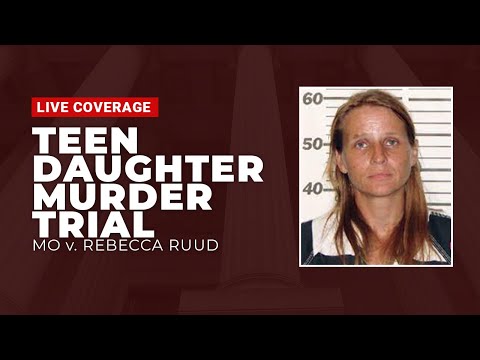 THIS IS A BENCH TRIAL, MEANING NO JURY, THE JUDGE MAKES THE DECISION

A Missouri woman is on trial for allegedly murdering her biological daughter. Opening statements in the murder case against Rebecca Ruud, 39, is scheduled to begin Monday, June 27 at about 8:30 a.m. CT / 9:30 a.m.

Daughter Savannah Leckie, 16, grew up in Minnesota with her adoptive parents, but moved in with Ruud at the woman’s 81-acre farm property. Colleagues at the Theodosia Area Volunteer Fire Department remembered her warmly as a junior firefighter, but her life with her biological mother was allegedly hell. Ruud abused her, literally putting salt and alcohol in her wounds, officials said, according to The Springfield News-Leader. Ruud also made Leckie roll in a pigpen and bathe in a muddy pond, officials have said.

Ruud allegedly contacted the fire department on July 18, 2017, to put out a fire on her property. She was later arrested at a Greyhound bus station in Springfield, Missouri after she purchased a ticket to Kansas City. She and her husband Robert Peat Jr., who is not Savannah’s biological father, were indicted for first-degree murder, second-degree murder, abuse or neglect of a child resulting in death, abandonment of a corpse, and tampering with physical evidence, but Peat’s defense has offered his testimony against Ruud.