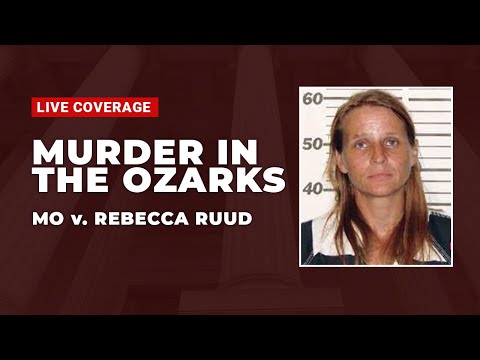 THIS IS A BENCH TRIAL, MEANING NO JURY, THE JUDGE MAKES THE DECISION

A Missouri woman is on trial for allegedly murdering her biological daughter.

Daughter Savannah Leckie, 16, grew up in Minnesota with her adoptive parents, but moved in with Ruud at the woman’s 81-acre farm property. Colleagues at the Theodosia Area Volunteer Fire Department remembered her warmly as a junior firefighter, but her life with her biological mother was allegedly hell. Ruud abused her, literally putting salt and alcohol in her wounds, officials said, according to The Springfield News-Leader. Ruud also made Leckie roll in a pigpen and bathe in a muddy pond, officials have said.

Ruud allegedly contacted the fire department on July 18, 2017, to put out a fire on her property. She was later arrested at a Greyhound bus station in Springfield, Missouri after she purchased a ticket to Kansas City. She and her husband Robert Peat Jr., who is not Savannah’s biological father, were indicted for first-degree murder, second-degree murder, abuse or neglect of a child resulting in death, abandonment of a corpse, and tampering with physical evidence, but Peat’s defense has offered his testimony against Ruud.