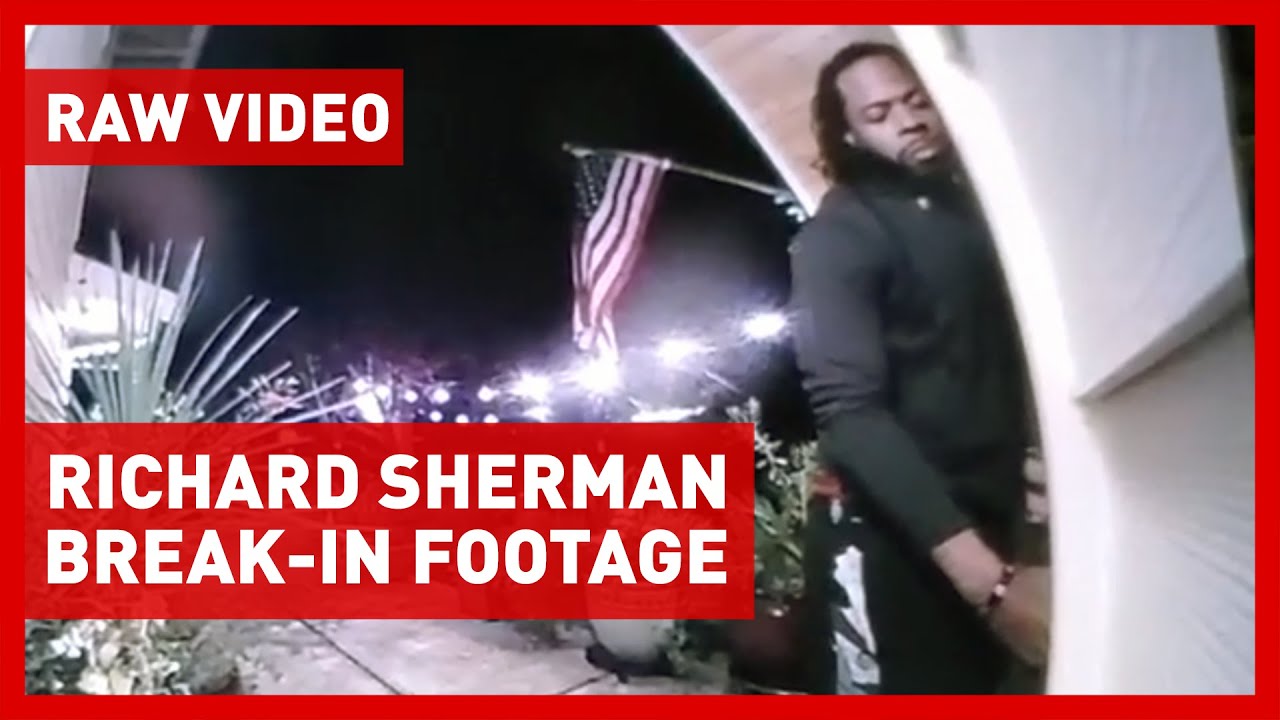 A home surveillance video of Richard Sherman’s confrontation at his in-laws’ house has emerged, shedding more light on an incident that resulted in the free agent cornerback jailed and charged with a litany of misdemeanors.

The video shows Sherman attempting to open the locked door, profanely demanding his father-in-law Raymond Moss come out of the house, then trying to break down the house with his arms and shoulder. Other occupants of the house can be heard screaming.

After the door holds firm, Sherman continues to demand Moss come out, repeatedly yelling “come through” before trying to push down the door again then stumbling away.

Sherman was later arrested outside the house by Redmond police officers and held without bail until his release Thursday. He faces charges of criminal trespassing, malicious mischief, driving under the influence and resisting arrest, all misdemeanors, while a felony charge of “burglary domestic violence” has been dropped.

Sherman appeared in court Friday, where he pleaded not guilty to all charges.

Before Sherman’s release, a judge ordered him to have no contact with his father-in-law and not use any alcohol or nonprescription drugs. Prosecutors also obtained an order forbidding him from having guns.

What happened with Richard Sherman?

The emergence of the above surveillance video is the latest documentation of what appears to have been a scary night for Sherman’s family.

In a recording of a 911 call obtained by multiple media outlets, a woman believed to be Sherman’s wife Ashley Sherman can be heard requesting immediate assistance after her husband became “drunk and belligerent” and threatened suicide during a confrontation with family members. The woman warns police that Sherman, whom she said was on antidepressants and was receiving mental health counseling, may try to fight them if they come to the scene.

In a follow-up call, the woman says she believes her husband is traveling to her parents’ home in Redmond, leading to the events of the video. Raymond Moss reportedly told officers he armed himself with a handgun and fired pepper spray at Sherman, though it’s unclear if that happens in the video.

The Redmond police chief told reporters the conversation with Sherman was “amicable” when officers arrived until Sherman allegedly fought with officers when he was told he would be taken into custody.

A police dog was reportedly deployed against Sherman because a Taser was deemed too dangerous due to the chemicals on his clothes and Sherman to be too close for a bean-bag gun, leading to minor cuts on Sherman’s lower leg that were later treated at a hospital.

Sherman is also accused of a single-car hit-and-run, with a different 911 caller describing a possibly impaired driver driving through a closed construction zone.

Ashley Moss responded to the alleged incident with the following statement to the Seattle Times:

“At this time we’re going to make no statements, except he didn’t harm anybody,” Moss said. “My kids were not harmed in the incident. He’s a good person and this is not his character. We’re doing all right, just trying to get him out. I want people to know no one was injured.”

At Sherman’s hearing, she reiterated her support for her husband pledged to get him the care that he needs, via the AP:

“I love and support my husband,” Sherman’s wife, Ashley Sherman, said in a statement after the hearing. “I am committed to helping Richard get the support and care that he needs. Richard has always been a loving father and husband. And we are looking forward to seeing him at home with his family.”

Nearly three weeks after the Idaho student murders shocked the college town of Moscow, investigators have backtracked on some of END_OF_DOCUMENT_TOKEN_TO_BE_REPLACED