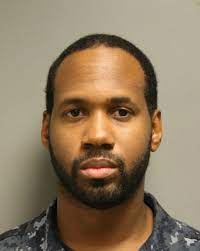 
A Virginia man who killed his Houston girlfriend after finding out she was pregnant with twins was sentenced to life in prison without parole after being convicted of capital murder this week.

“This poor woman opened the door to her home and thought she would be celebrating a new chapter in her life, but instead the man she loved brutally stabbed her to keep their relationship secret,” Harris County District Attorney Kim Ogg said. “This was a planned, premeditated and cold-blooded case of domestic violence.”

Marcus Levail Murphy, 36, who is in the U.S. Navy and wore his naval uniform throughout the weeklong trial, flew to Houston for three hours on Feb. 24, 2015. He drove from his home in Virginia to Charlotte, NC, then flew to Detroit and on to Houston. When he left Houston, he flew to Atlanta and then Charlotte to pick up his car, spending more than $1,000 on plane tickets in total.

Once in Houston, he went to the apartment of his girlfriend, Ebony Harris, 28, and fatally stabbed her.

The pregnant mother of two had recently told Murphy she was expecting twins and that they were his, although she was pregnant from another man. Murphy already had twins with his girlfriend in Virginia.

According to his flight records, he booked a flight to Houston after she broke the news and was in town for just three hours. Investigators tracked his cellphone to Harris’s home during those three hours, and his DNA was found underneath her fingernails. Her body was found in her home the next day.

“He hoped to cover his tracks, but flight information, DNA and cellphone records proved what he did,” said Assistant District Attorney Samantha Knecht, who prosecuted the case with ADA Lisa Calligan. “Ebony fought hard, but she could not stop this man, and we’re proud that this jury did.”