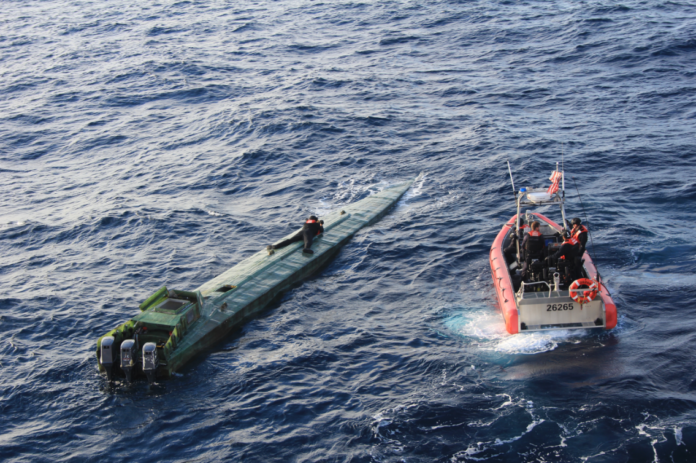 During the patrol, the Mohawk made significant advances in combating transnational criminal organizations and stopped more than 12,000 pounds of illicit drugs, valued at over $218 million.

“I am extremely proud of this crew and all they have accomplished,” said Cmdr. Andrew Pate, commanding officer of the Coast Guard Cutter Mohawk. “Despite encountering some significant equipment and logistics challenges, the Mohawk crew rose to the occasion time and again, demonstrating superior tactical proficiency and dedication to this joint mission. Keeping a 30-year-old cutter fully mission capable for two months in a harsh environment wouldn’t be possible without partnerships on the water and unwavering support from back home. Mohawk’s success in the Eastern Pacific Ocean is reflective of an increased commitment by U.S. and international partners to detect, disrupt, and deter criminal activity destabilizing the region.”

The Mohawk’s crew kicked off the deployment with a biannual shipboard training cycle off the coast Jacksonville, Florida. During a compressed week-long evaluation period, Mohawk’s crew demonstrated their knowledge and skills by completing 76 drills in the areas of damage control, navigation, seamanship, naval warfare, communications, medical response, engineering casualties and force protection. The crew’s efforts resulted in an average drill score of 96 percent, demonstrating excellence in all warfare areas.

The Mohawk’s crew also located, and successfully freed, a green sea turtle trapped in fishing gear off the coast of Central America.

On April 1, 2020, U.S. Southern Command increased counter-narcotics operations in the Western Hemisphere to disrupt the flow of drugs. Numerous U.S. agencies from the Departments of Defense, Justice, and Homeland Security cooperated in the effort to combat transnational organized crime. The Coast Guard, Navy, Customs and Border Protection, FBI, Drug Enforcement Administration, and Immigration and Customs Enforcement, along with allied and international partner agencies, play a role in counter-drug operations.

The fight against drug cartels in the Eastern Pacific Ocean and the Caribbean Sea requires unity of effort in all phases from detection, monitoring and interdictions, to criminal prosecutions for these interdictions by United States Attorney’s Offices from the Middle District of Florida, the Southern District of Florida and the Southern District of California. The law enforcement phase of counter-smuggling operations in the Eastern Pacific Ocean is conducted under the authority of the Eleventh Coast Guard District, headquartered in Alameda, California. The interdictions, including boarding vessels, are led and conducted by members of the U.S. Coast Guard.

The Mohawk is the last of the 270-foot Famous-class cutters, commissioned in March 1991 and homeported in Key West, Florida.

Police: Man Killed After Opening Fire At Deputies Outside Walmart In Spring, Texas