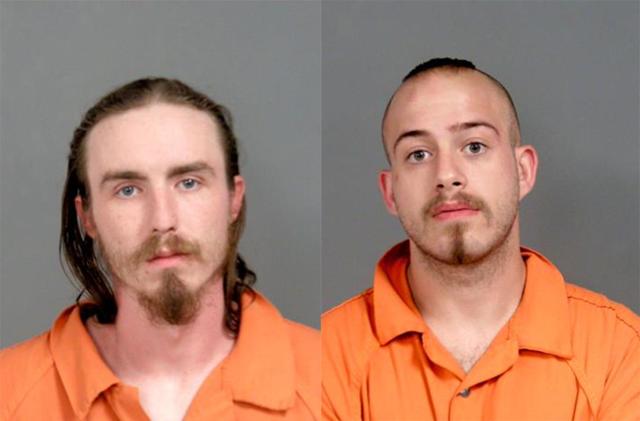 Two men charged with terrorism, other charges after shots fired at police chopper

Two Flint men have been arrested after shots were fired at a Michigan State Police helicopter.

The helicopter was assisting Flint police officers and deputies from the Genesee County Sheriff’s Office who were responding to the area of Miller and Hammerberg Road for a report of shots fired, MSP said.

The preliminary investigation indicates the helicopter located two men on a bridge, southeast of the original location, in the Happy Hollow Nature Area. Trooper 3 observed the two men pass a firearm back and forth, police said.

“As Trooper 3 patrolled above the area and monitored them, one of the men was seen pointing the firearm along a creek, firing several shots, and handing the firearm to the second person. The second man pointed the firearm at Trooper 3 and fired at least five shots at the aircraft,” police said.

The flight crew was able to guide officers on the ground to the suspects. They were both taken into custody and a firearm was recovered.

The flight crew members were not injured and Trooper 3 did not sustain any damage, police said.

The suspects, David Cox and Jeremy Engelman, both 26-years-old and from Flint, were arraigned Tuesday morning. They were charged with assault with intent to murder, terrorism, attempted malicious destruction of police property, and felony firearm.

They both remain lodged in the Genesee County Jail on a $50,000 cash bond.