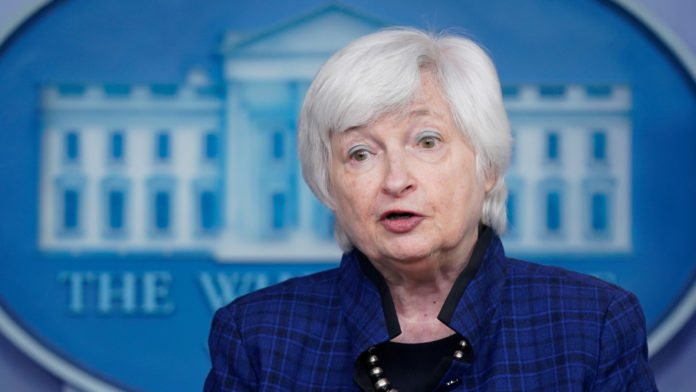 
WASHINGTON — Today, U.S. Secretary of the Treasury Janet L. Yellen sent a letter to Congressional leadership regarding the debt limit.

I write to keep you apprised of actions the Treasury Department is taking in regard to the debt limit. In my letter of July 23, I noted that the Bipartisan Budget Act of 2019 suspended the statutory debt limit through July 31, and informed you that beginning on August 1, the outstanding debt of the United States would be at the statutory limit. Due to the reinstatement of the debt limit, on July 30 Treasury suspended until further notice the sale of State and Local Government Series securities. This letter serves to notify you, pursuant to 5 U.S.C. §§ 8348(l)(2) and 8438(h)(2), of additional extraordinary measures Treasury began using today.

First, I have determined that, by reason of the statutory debt limit, I will be unable to fully invest the portion of the Civil Service Retirement and Disability Fund (CSRDF) not immediately required to pay beneficiaries, and that a “debt issuance suspension period” will begin on Monday, August 2, 2021 and last through Thursday, September 30, 2021. My predecessors have declared debt issuance suspension periods under similar circumstances. With these determinations, the Treasury Department will suspend additional investments of amounts credited to, and redeem a portion of the investments held by, the CSRDF, as expressly authorized by law.

In addition, because the Postal Accountability and Enhancement Act of 2006 provides that investments in the Postal Service Retiree Health Benefits Fund (PSRHBF) shall be made in the same manner as investments for the CSRDF, the Treasury Department will suspend additional investments of amounts credited to the PSRHBF. By law, the CSRDF and the PSRHBF will be made whole once the debt limit is increased or suspended. Federal retirees and employees will be unaffected by these actions.

Second, I have also determined that, by reason of the statutory debt limit, I will be unable to invest fully the Government Securities Investment Fund (G Fund) of the Thrift Savings Fund, part of the Federal Employees’ Retirement System, in interest-bearing securities of the United States, beginning today, August 2, 2021. The statute governing G Fund investments expressly authorizes the Secretary of the Treasury to suspend investment of the G Fund to avoid breaching the statutory debt limit. My predecessors have taken this suspension action in similar circumstances. By law, the G Fund will be made whole once the debt limit is increased or suspended. Federal retirees and employees will be unaffected by this action.

I respectfully urge Congress to protect the full faith and credit of the United States by acting as soon as possible.