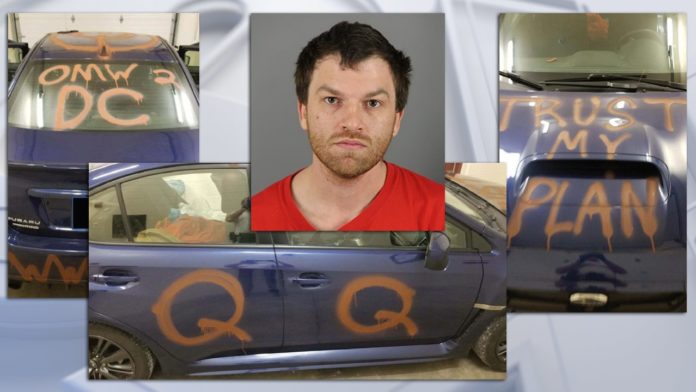 “This is for America!” QAnon Believer Admits To Paintball Attack on U.S. Servicemembers at Reserve Center

As detailed in a plea agreement filed in the case, on March 15, 2021, Olson drove his vehicle to the U.S. Army Reserve station in Pewaukee, Wisconsin. Olson then got out of his vehicle, produced what appeared to be a rifle, pointed it at two uniformed U.S. Army servicemen who were the station’s parking lot, and exclaimed “This is for America.” Olson then fired the weapon, which turned out to be a paintball gun, directly at the two servicemen. After Olson’s paintball gun jammed, the servicemen tackled him to the ground. “You’re lucky it jammed,” he said.

Both servicemen “initially believed Olson was holding a real firearm and they feared that Olson intended to shoot and kill them,” court documents say.

The Milwaukee Journal Sentinel reported: Court documents show Olson traveled to Washington, D.C., in March, before the incident in Pewaukee, and was admitted to a hospital for psychological evaluation after he made concerning comments to the U.S. Capitol Police.

According to a report from the Capitol Police, on March 3 Olson approached a member of the National Guard in D.C. and said he was “’maybe going to do something crazy stupid tomorrow” and asked them not to shoot him.

Olson also said his actions would “be big” and that he was not afraid to die for his mission.

Court records show Olson was admitted to a hospital March 5 and stayed there for four days. He was diagnosed with a “brief psychotic disorder,” according to an arrest warrant.