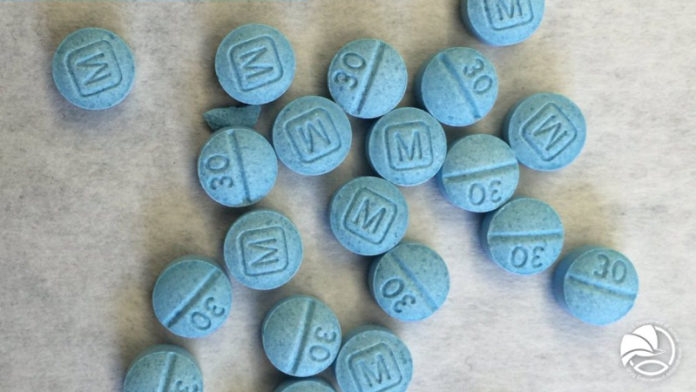 LAREDO, Texas – A 19-year-old Laredo resident has been charged for conspiracy to possess with intent to distribute 1.42 kilograms of fentanyl.

Today, a federal grand jury returned the two-count indictment against Ivan Eleodoro Garcia. He is expected to appear for his arraignment before a U.S. magistrate judge in the near future.

The complaint originally filed in the case alleges that on Sept. 29, Garcia drove a 2014 Ford Taurus sedan into the Border Patrol (BP) checkpoint on I-35 north of Laredo. Three, a K-9 unit allegedly alerted law enforcement to the presence of concealed humans or narcotics at the rear of the vehicle.

Authorities conducted a search and allegedly discovered a custom-installed hidden compartment between the trunk and passenger area of the sedan. The charges also allege they discovered 13 bags containing 1.42 kilograms of blue pills. Law enforcement allegedly believed the pills were oxycodone hydrocholoride due to an embossed letter M on each pill. However, a field test later revealed the pills were counterfeit and contained fentanyl, according to the charges.

If convicted, Garcia faces up to life in prison a possible $10 million maximum fine.

The Drug Enforcement Administration conducted the investigation with the assistance of BP. Assistant U.S. Attorney Paul A. Harrison is prosecuting the case.

An inmate goes on a rampage when he suspects police officers lost his money. Officers have a tough time with END_OF_DOCUMENT_TOKEN_TO_BE_REPLACED

Andrew Tate and his brother, Tristan, are still being detained by Romanian authorities as they conduct their investigation into allegations END_OF_DOCUMENT_TOKEN_TO_BE_REPLACED

Prosecutors motioned the court to allow key testimony from witnesses who may have knowledge of Alex Murdaugh’s past crimes. The END_OF_DOCUMENT_TOKEN_TO_BE_REPLACED