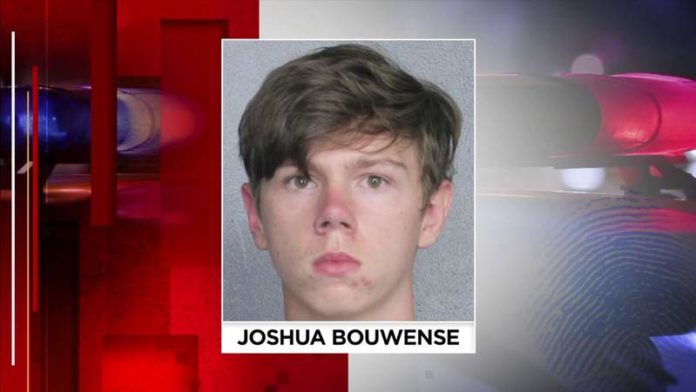 Teen To Be Charged As Adult For Allegedly Breaking Into Home and Kidnapping 7-Year-Old Girl, Deputies Say


COOPER CITY, FLA. – A Cooper City teen faces additional charges of armed kidn apping and armed lewd or lascivious conduct on a 7-year-old victim in an incident that occurred earlier this month.

Broward Sheriff’s Office Special Victims Unit detectives say that in the early morning hours of Aug. 2, Joshua Bouwense, armed with a knife, entered a home in the Flamingo Lakes Townhomes community in Cooper City and made his way to the victim’s room and told the 7-year-old to take off her clothes.

He then took the victim to a secluded area of the home. The victim fought and screamed for help, prompting Bouwense to flee the scene. Investigators positively identified the 16-year-old male through DNA evidence.

Bouwense had been caught on surveillance video prowling around the community. He was initially arrested on one count of armed burglary of a dwelling in the development hours after the crime against the 7-year-old victim occurred and has been in custody since that arrest.

As of Aug. 23, Bouwense faces additional charges of armed kidnapping, armed burglary of a dwelling and armed lewd or lascivious conduct.

Police didn’t say if the suspect and child had any relation to each other.

Kitesurfer Dead After Slamming Into Wall Of Home In Fort Lauderdale

On this episode of “Prime Crime with Jesse Weber,” he takes us through the bizarre case of Anthony Todt, a END_OF_DOCUMENT_TOKEN_TO_BE_REPLACED

Andrew Tate and his brother, Tristan, were arrested in Romania a month ago for allegations of human trafficking and organized END_OF_DOCUMENT_TOKEN_TO_BE_REPLACED