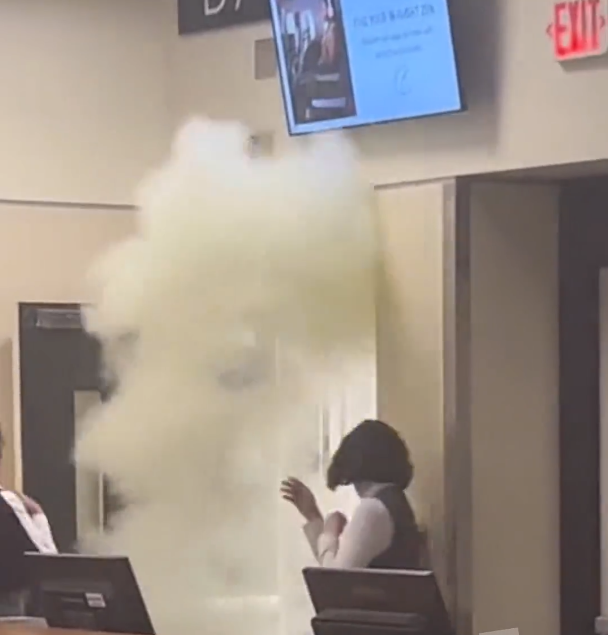 
ATLANTA – On January 17, 2023 at around 9:34pm, Atlanta police officers responded to a report of a suspicious female attempting to open secured doors at Hartsfield-Jackson International Airport’s concourse D.

Upon arrival, officers met with airport security who had requested their assistance. The female, identified as Jennifer Holder, had been spotted discharging a fire extinguisher in gate D-9.

Despite being sprayed with the extinguisher, officers were able to detain her. Three flight attendants were taken to the hospital with respiratory complaints due to exposure to the extinguisher.

Holder continued to behave erratically and combatively while in custody, spitting and kicking at officers.

Emergency medical services were called to evaluate her for minor injuries she sustained during the incident. She was cleared by the medical staff and transported to the Clayton County jail with several charges pending, including assault. The investigation is ongoing.

An inmate goes on a rampage when he suspects police officers lost his money. Officers have a tough time with END_OF_DOCUMENT_TOKEN_TO_BE_REPLACED

Andrew Tate and his brother, Tristan, are still being detained by Romanian authorities as they conduct their investigation into allegations END_OF_DOCUMENT_TOKEN_TO_BE_REPLACED

Prosecutors motioned the court to allow key testimony from witnesses who may have knowledge of Alex Murdaugh’s past crimes. The END_OF_DOCUMENT_TOKEN_TO_BE_REPLACED