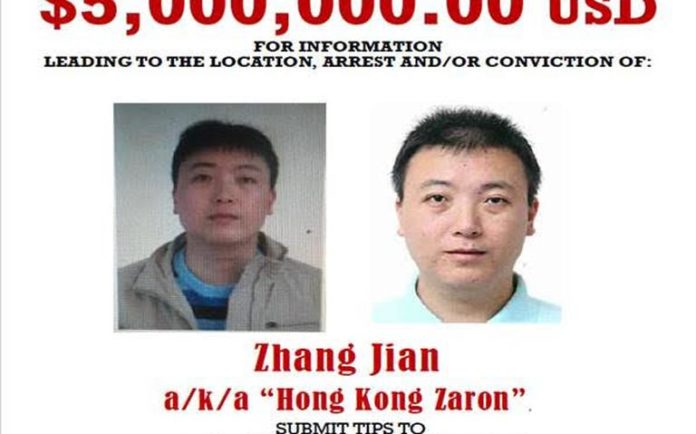 Reward Up To $5 Million Offered For Alleged Fentanyl Dealer


MIAMI, Fla. – The U.S. Drug Enforcement Administration (DEA) and the U.S. Department of State today announced a new reward for information that will lead to the location, arrest, and/or conviction of People’s Republic of China (PRC) national Jian Zhang, a key leader of a transnational criminal organization known as the Zhang Drug Trafficking Organization (DTO).

In a superseding indictment in January 2018, Zhang was further charged in the U.S. Attorney’s Office District of North Dakota, along with several other U.S., Canadian, and PRC nationals, with Continuing Criminal Enterprise (CCE), drug trafficking conspiracy, international money laundering conspiracy, and trafficking of illicit drugs which led to death and/or serious bodily injury.  Several of the U.S. nationals have already been convicted and sentenced to penalties ranging from 20 years to life imprisonment.  These strict sentences are the result of provisions under U.S. law, which sets the penalty for conspiracy to manufacture, distribute, and possess with the intent to distribute certain controlled substances and controlled substance analogues resulting in death at a minimum mandatory sentence of 20 years imprisonment.

“This investigation is an outstanding example of the commitment that DEA has to working with our domestic and international law enforcement partners to dismantle these drug trafficking organizations throughout the world, and emphasizes our dedication to keeping our communities safe and healthy,” said DEA Miami Field Division Acting Special Agent in Charge La Verne Hibbert. “We hope that this reward will encourage those with valuable information to contact DEA to bring Mr. Zhang to justice.”

This investigation was conducted by the DEA Miami Field Division, HSI Miami Field Office, HSI Grand Forks Office, and the HSI Oregon Field Office.  It is being prosecuted by the U.S. Attorney’s Office, District of North Dakota with assistance from the U.S. Attorney’s Office for the District of Oregon, and the Department of Justice’s Narcotic and Dangerous Drug Section.  The indictment of Jian Zhang and others in his transnational criminal organization were supported and coordinated by the multi-agency Special Operations Division (SOD).

If you have information, please contact the DEA by calling or texting +1-504-534-5134 via telephone/text/WhatsApp, or emailing [email protected].

This reward is offered under the Department of State’s Transnational Organized Crime Rewards Program (TOCRP).  Since its establishment by Congress in 1986, more than 75 transnational criminals and major narcotics traffickers have been brought to justice under the TOCRP and the Narcotics Rewards Program (NRP) with the Department of State paying more than $135 million in rewards to date.

Nearly three weeks after the Idaho student murders shocked the college town of Moscow, investigators have backtracked on some of END_OF_DOCUMENT_TOKEN_TO_BE_REPLACED