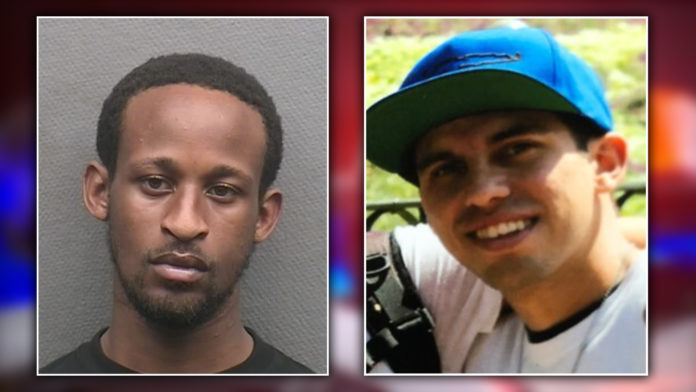 
TEXAS – A Houston man has been sentenced to life in prison without parole for capital murder for killing a man during a carjacking in Spring in 2015, Harris County District Attorney Kim Ogg announced Tuesday.

“The capital murder of Michael Aldana during a carjacking was part of a night-long crime spree that included four other violent armed robberies and a police chase,” Ogg said. “This defendant used a gun to rob and kill and has still never shown any remorse for gunning down a stranger for a quick score.”

Jamal Ferguson, 27, was convicted of capital murder late Monday and was automatically sentenced to life in prison without parole after a weeklong trial. Ferguson and another man, Eric Guzman, killed 28-year-old Aldana while carjacking him in the 900 block of Spring Cypress Road in Spring on April 5, 2015. Guzman has already pleaded guilty to murder and was sentenced to 40 years in prison.

The two men started their crime spree about 7 p.m. the day before Easter 2015 by robbing a healthcare worker in the parking lot of the Spring nursing home where she worked. She was able to reverse her red Toyota and get away as one of the men shot at her, hitting the hood of the car.

The duo then jumped a fence and robbed another women, taking her blue Mazda. Minutes later, they cruised through the parking lot of a Target store and brandished the pistol to threaten a woman and stole her purse.

About six hours later, at 1 a.m., Ferguson and Guzman robbed a man sitting alone in his car at a McDonald’s restaurant off Interstate 45 North. About a half-hour later, they shot Aldana while robbing him as he sat alone in his car in a parking lot a few blocks away. Before he died, he was able to give police a description of the gunmen. A Houston police officer saw the blue Mazda around 2:55 a.m. and tried to pull over the two men, who led police on a high-speed chase that ended in a crash.

Ferguson and Guzman escaped that night, but police found a gun in the stolen Mazda, along with personal items, like cellphones, that belonged to each of their victims. A ballistics expert was able to show that the bullet that killed Aldana and the bullet that had been shot into the hood of the Toyota were from the gun recovered in the Mazda. DNA analysis provided proof that Guzman and Ferguson were in the vehicle at the time of the crash.

Assistant District Attorney Kathryn Rogers, who prosecuted the case with Joshua Raygor, said Aldana’s family waited seven years for justice and is satisfied that Ferguson will spend the rest of his life in prison.

“They went on a reign of terror, targeting people who were alone, and when they didn’t get what they wanted, they started shooting,” said Rogers, who is part of the district attorney’s Homicide Division. “They spent that night tormenting the citizens of Harris County.”

ALL PROCEEDS WILL BENEFIT THE NATIONAL CENTER FOR END_OF_DOCUMENT_TOKEN_TO_BE_REPLACED