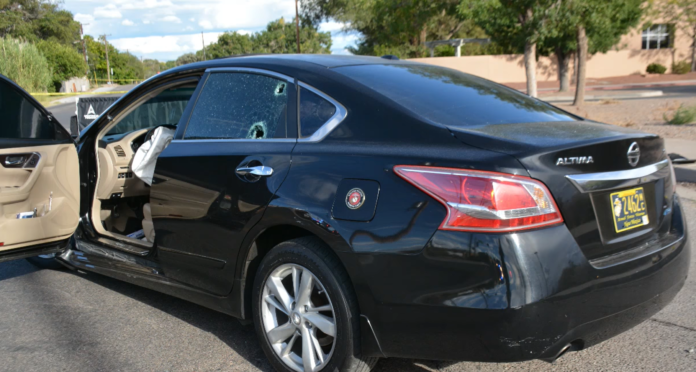 
Albuquerque, NM – Six Bernalillo County Sheriff’s deputies shot and killed Colby Atkins, 45, after he pointed what they thought was a gun at passersby.

On September 20, 2022, at approximately 1:23 pm, Bernalillo County Sheriff’s Deputies were flagged down at 201 Rio Bravo Blvd SW in reference to a suspicious person inside a vehicle. Deputies on the scene attempted to make contact with the suspect. Upon contact, the suspect fled in his vehicle after striking two deputy units. The suspect continued to flee westbound on Rio Bravo and turned southbound on Isleta Blvd. The suspect crashed into two civilian vehicles causing his vehicle to become disabled near the intersection of Isleta Blvd Sw and Camino Del Valle SW.

The suspect eventually exited the vehicle and refused to comply with the deputy’s commands. He continued to make sporadic movements while using the vehicle to conceal himself. Deputies attempted to break out the heavily tinted windows utilizing bean bag rounds to improve visibility. At one point, the suspect makes a distinct movement as if holding a firearm and aims a black object toward a motorist behind him.

Five deputies and a sergeant fired at the suspect.

Multiple witnesses of the deputy-involved shooting were interviewed and stated they observed the suspect pointing what was perceived to be a firearm. The object was later determined to be a black flashlight recovered from the scene. Fentanyl, heroin, and drug paraphernalia were located in the vehicle, along with dozens of bank cards with
various identities.

The suspect has been identified as 45-year-old, Colby Atkins. Atkins has an extensive criminal history. In 2020, Atkins was released from federal prison. At the time of the shooting, Atkins was in a stolen vehicle and had multiple active arrest warrants.

An inmate goes on a rampage when he suspects police officers lost his money. Officers have a tough time with END_OF_DOCUMENT_TOKEN_TO_BE_REPLACED

Andrew Tate and his brother, Tristan, are still being detained by Romanian authorities as they conduct their investigation into allegations END_OF_DOCUMENT_TOKEN_TO_BE_REPLACED

Prosecutors motioned the court to allow key testimony from witnesses who may have knowledge of Alex Murdaugh’s past crimes. The END_OF_DOCUMENT_TOKEN_TO_BE_REPLACED