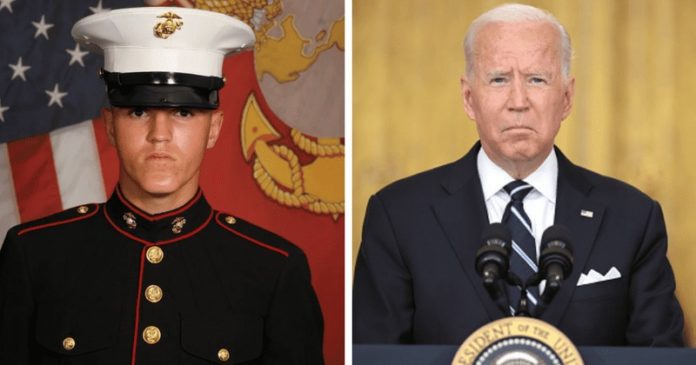 “That feckless, dementia-ridden piece of crap just sent my son to die. I woke up at four o’clock this morning, two Marines at my door telling me my son was dead. So, to… right before me and listen to that piece of crap talk about diplomatic crap with frickin Taliban terrorists who just freakin blew up my son and no, nothing, to not say anything about oh my god, I’m so sorry for families. So, my son is gone.”

“I never thought in a million years [my son] would die for nothing, for nothing, because that feckless, dementia-ridden piece of crap who decided he wanted a photo-op on September 11,” she said. “That’s what kills me. I wanted my son to represent our country, to fight for my country. But I never thought that a feckless piece of crap would send him to his death and smirk on television while he’s talking about people dying with his nasty smirk. The dementia-ridden piece of crap needs to be removed from office. It never would have happened under Trump.”

“You just killed my son with a dementia-ridden piece of crap who doesn’t even know he’s in the White House. He still thinks he’s a senator.”

Murder suspect caught after returning to scene for cellphone

This episode of “Court Junkie” dives into the true crime story of Grant Amato, the man found guilty of murdering END_OF_DOCUMENT_TOKEN_TO_BE_REPLACED