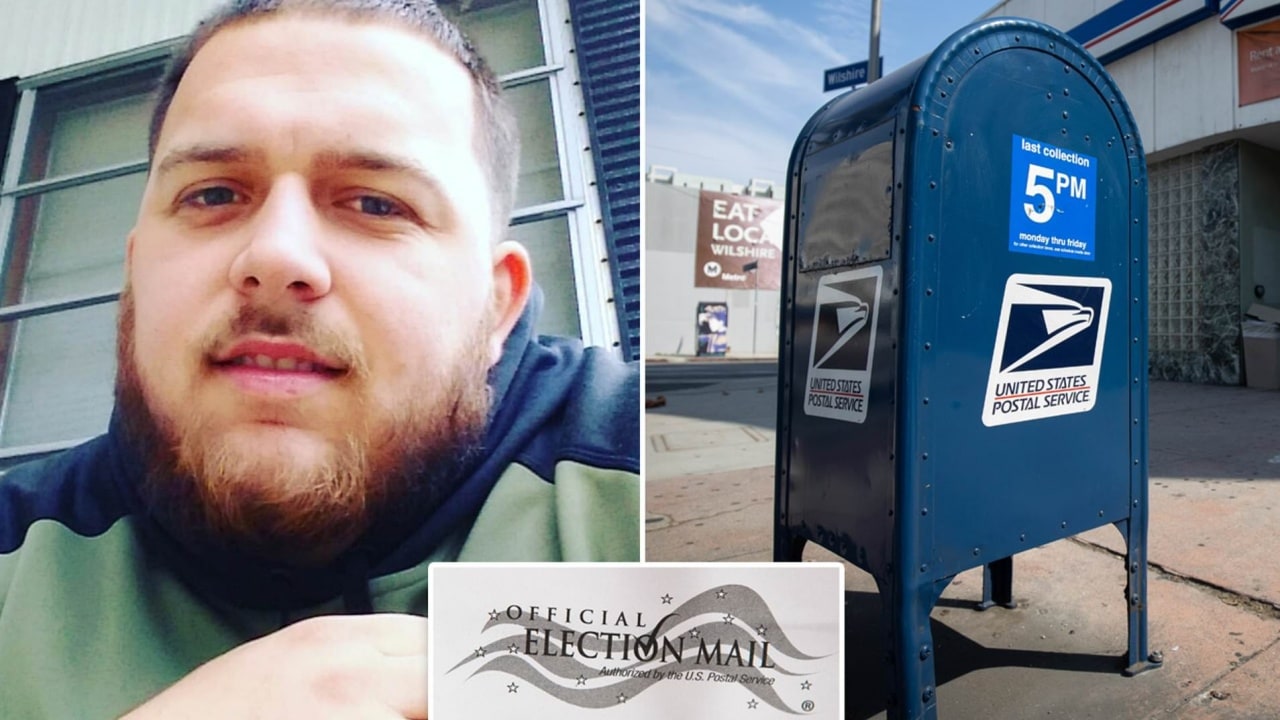 Nicholas Beauchene, 26, of Kearny, New Jersey, pleaded guilty before U.S. Magistrate Judge Cathy L. Waldor in Newark federal court to an information charging him with one count of desertion of mails.

According to documents filed in this case and statements made in court:

Beauchene admitted that on Sept. 28, Oct. 1, and Oct. 2, 2020, he discarded into dumpsters in North Arlington, New Jersey, and West Orange 1,875 pieces of mail that he was assigned to deliver to postal customers in West Orange and Orange, New Jersey. This mail included 627 pieces of first-class mail, 873 pieces of standard class mail, two pieces of certified mail, 99 general election ballots destined for residents in West Orange, and 276 campaign flyers from local candidates for West Orange Town Council and Board of Education. Law enforcement recovered the mail on Oct. 2, 2020, and Oct. 5, 2020, and placed it back into the mail stream for delivery.

The desertion of mail charge is punishable by a maximum penalty of one year in prison and a $100,000 fine. Sentencing has been scheduled for Sept. 21, 2021.

Acting U.S. Attorney Honig credited special agents of the USPS-Office of Inspector General, Northeast Area Field Office, under the direction of Special Agent in Charge Matthew Modafferi, with the investigation.

The government is represented by Assistant U.S. Attorney Sara F. Merin of the Special Prosecutions Division in Newark. 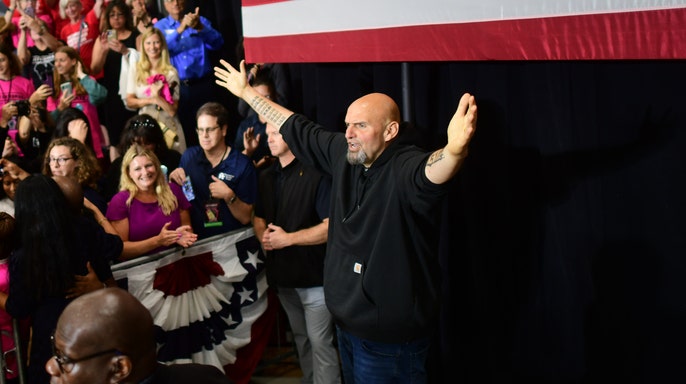 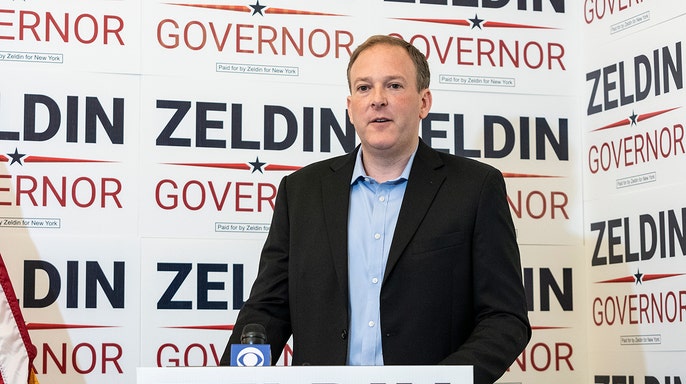 An upstate New York district attorney is moving forward with a criminal probe into elections fraud allegations lauded against Republican candidate for governor Rep. Lee Zeldin the same week absentee ballots are being sent out in the high-stakes race against Democratic Gov. Kathy Hochul.

The Times Union first reported on Sunday that Albany County District Attorney’s Office and the New York State Board of Elections were moving forward with a criminal investigation into thousands of duplicated signatures submitted during the nomination process as part of an effort to secure Zeldin on the Independence Party Line.

Zeldin himself was not involved in the process of submitting the signatures, according to the newspaper. That was handled by John F. Haggerty, Jr., who serves in a leadership role for the New York State Republican Party.

When news of the election fraud allegations initially broke this summer, Zeldin’s campaign spokeswoman, Katie Vincentz, denied that the Republican’s campaign participated or had any knowledge of the photocopied signatures and said Hochul was “desperate for any distraction” from her own failures regarding soaring violence in the state, calling the Democratic governor the “undisputed queen of scandal, abuse, and pay to play corruption.”

Zeldin’s campaign did not immediately return requests for comment sent on Monday.

“After months of non-answers and finger-pointing, New Yorkers deserve to know who exactly was involved in Xerox Zeldin’s election fraud scandal. The facts here are clear: Zeldin’s campaign manager knowingly signed off on 47 volumes of petitions containing more than 11,000 photocopied signatures,” Hochul’s campaign manager, Brian Lenzmeier, said in a statement on Sunday.

“As a congressman, Lee Zeldin supported legal efforts to overturn the 2020 election and pushed baseless conspiracy theories under the banner of ‘election integrity,’ but apparently that doesn’t apply to his own campaign,” Lenzmeier alleged. “His campaign is now implicated in a criminal investigation for attempting to defraud voters and Zeldin needs to be held accountable.”

Haggerty was sentenced in 2011 to nearly four years in prison following a grand larceny and money laundering conviction for stealing $750,000 from former New York City Mayor Michael R. Bloomberg during his 2009 re-election campaign, according to a New York Times story at the time.

In August, a spokeswoman for the New York Board of Elections confirmed to Fox News Digital that of the signatures submitted for Zeldin to run on the Independence Party line — in addition to the GOP ticket — just 39,228 were validated, falling short of the 45,000 required. Nearly 13,000 others were deemed invalid for a swath of reasons, including duplicate signatures, voters not properly registered, or incorrect addresses, she said. She did not comment on whether any photocopied signatures were found.

The news about the criminal probe comes around the same time the Times Union reported about an alleged pay-to-play COVID-19 test deal for one of Hochul’s political donors. According to the report, Hochul’s campaign received $300,000 from a donor whose company, Digital Gadgets, later secured an over $600 million contract to supply rapid tests for New York state. California paid 45% less for rapid COVID-19 tests by buying directly from the same New Jersey-based supplier, AccessBio.

New York could have saved $286 million if it paid the same price, according to the report.

In an appearance on Fox News on Sunday, Zeldin appealed to Democratic voters in the staunchly blue electorate to help him “save this state,” criticizing Hochul for suggesting that he move down to Florida after she’s accused the Republican of being a pro-Trump extremist not fit to run New York. 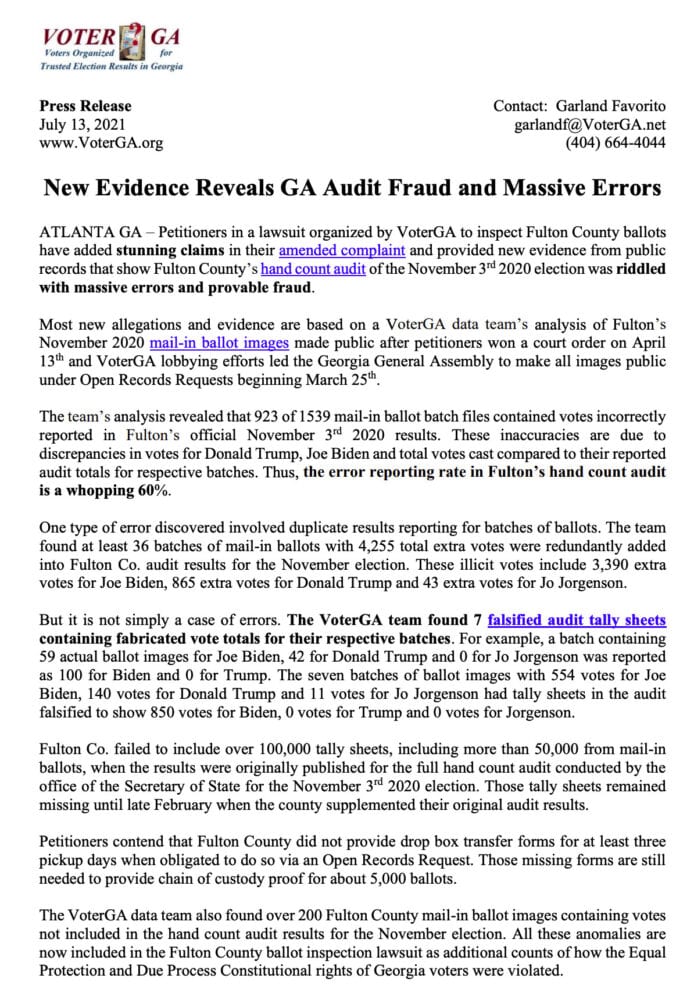 A new report is out today detailing massive voter fraud in Fulton County, which is outlined below by Liz Harrington:

THIS INCLUDES “DUPLICATE RESULTS REPORTING FOR BATCHES OF BALLOTS”HTTPS://T.CO/5MNGCNWHHF

“BUT IT IS NOT SIMPLY A CASE OF ERRORS. THE VOTERGA TEAM FOUND 7 FALSIFIED AUDIT TALLY SHEETS CONTAINING FABRICATED VOTE TOTALS FOR THEIR RESPECTIVE BATCHES.”

NOTHING TO SEE HERE! PIC.TWITTER.COM/AXIAPM9HCT

Here’s an example of the fabrications:

“A BATCH CONTAINING 59 ACTUAL BALLOT IMAGES FOR JOE BIDEN, 42 FOR DONALD TRUMP AND 0 FOR JO JORGENSON WAS REPORTED AS 100 FOR BIDEN AND 0 FOR TRUMP.”

The full report from VoterGA, which is just one page, is below:

It’s pretty incredible the outright, intentional fraud they found from the AUDIT process. And yet Biden today claimed the 2020 election was the best election ever or something.

Is it any wonder why the state of Georgia is taking over Fulton County elections?