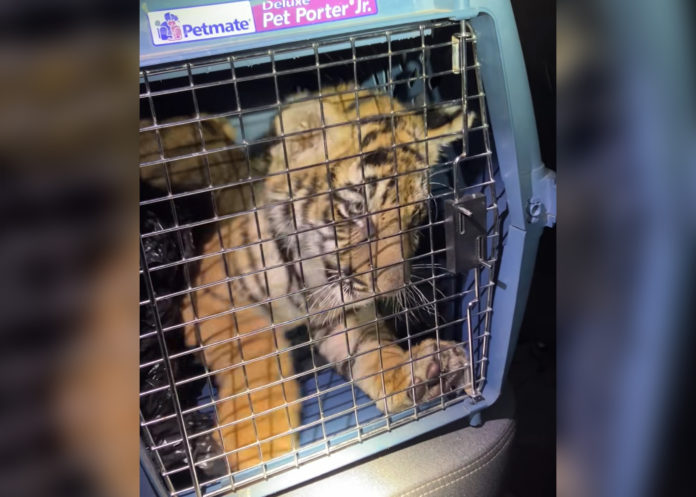 
ALBUQUERQUE, NM – Officers located a young tiger inside a home in Southeast Albuquerque while responding to a shooting.

On Tuesday, January 10, 2023 Albuquerque Police Officers were alerted to shots fired at 304 Indiana Street S.E. at approximately 2:15p.m. from ShotSpotter. While on the way, someone at the Allsups reported someone had been shot outside the business. Upon arrival, officers located an individual with a gunshot wound to the leg.

While one scene, an additional gunshot was heard coming from a mobile home just to the North of the Allsups. Officers quickly began to move towards the gunfire and located Kevin Gerardo Vargas Mercado who was armed with a semiautomatic handgun with an extended magazine. Mercado was taken into custody without incident.

Officers then began to follow a trail of blood leading to a trailer in the area. As they approached the trailer, the door was unlocked and the trail led inside. Officers made entry to attempt to render aide to anyone who may have been wounded, but did not locate anyone and have yet to locate the individual.

While inside the trailer, a Bangle Tiger cub was found inside a dog crate. The Gun Violence Reduction Unit was called out to assist and attained a search warrant for the residence in order to retrieve the tiger. The New Mexico Department of Game and Fish was contacted and took custody of the tiger.

The Gun Violence Reduction Unit has taken over the ongoing shooting investigation, and preliminarily it appears the shooting victim who was located at the Allsups was standing outside while the incident occurred and was struck by a stray bullet.

A suspect was killed after being involved in two back-to-back shootouts with Arizona police on January 6 and 7. Authorities END_OF_DOCUMENT_TOKEN_TO_BE_REPLACED

A federal judge allowed a wrongful death lawsuit against Kyle Rittenhouse to proceed. Rittenhouse was found not guilty of shooting END_OF_DOCUMENT_TOKEN_TO_BE_REPLACED