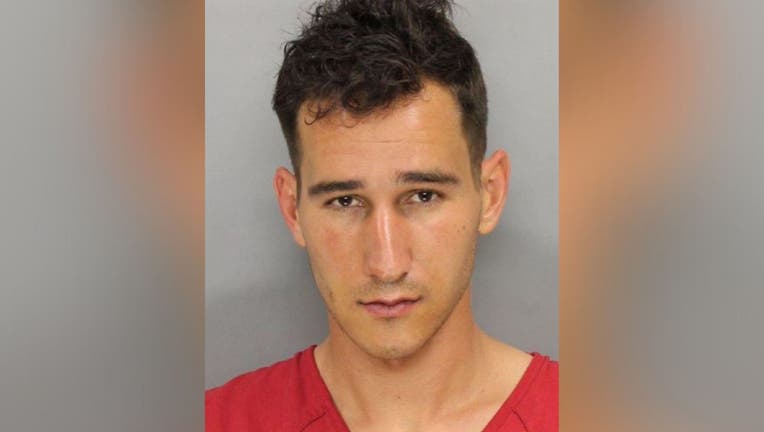 The Federal Bureau of Investigation on Wednesday released additional details in their investigation into a burst of violence at a Pentagon Metrobus platform in which an officer was stabbed to death, and the suspect died.

A mugshot of the suspect – Austin William Lanz, 27, of Georgia – was released by the Cobb County sheriff’s office on Wednesday

According to the FBI, Lanz got off the bus at the Pentagon Transit Center in Arlington and immediately assaulted Pentagon officer George Gonzalez with a knife, severely wounding him.

During the struggle, the FBI says, Lanz grabbed Gonzalez’s gun and shot himself. After other Pentagon officers responded to the scene, Lanz died.

A person who was standing nearby was also injured. That person was taken to a local hospital and treated for injuries that the FBI says were not life threatening. That victim has since been released.

The agency released the information on Twitter Wednesday. Gonzalez was a New York native who joined the Pentagon Force Protection Agency in 2018.

Officials say he was twice promoted and became a Senior Officer in 2020. Gonzalez was a military and police veteran and had previously been a part of the Federal Bureau of Prisons, the Transportation Security Administration, and United States Army. He was also awarded the Army Commendation Medal for his service in Iraq.

“Officer Gonzalez embodied our values of integrity and service to others,” their statement said. “As we mourn the loss of Officer Gonzalez, our commitment to serve and protect is stronger. Officer Gonzalez’s family is in our thoughts and prayers. May he rest in peace.”

Officials described Gonzalez as gregarious, well-liked and respected. He was a “die-hard Yankees fan,” they said.

Gonzalez was stabbed and killed during a burst of violence outside of the U.S. military’s headquarters. The incident happened Tuesday morning at a transit center outside the Pentagon and also left the suspect dead after being shot by law enforcement. The investigation is c ontinuing at this time.

Here’s what we know today:

– The incident began around 10:30 a.m. Tuesday on a Metro bus platform that is part of the Pentagon Transit Center, a hub for subway and bus lines.

– The Pentagon was on lockdown for about two hours.

– Gonzalez was stabbed in the neck and transported to a hospital where he later died.

– Defense Secretary Lloyd Austin issued a statement that read in part: “This fallen officer died in the line of duty, helping protect the tens of thousands of people who work in — and who visit — the Pentagon on a daily basis. This tragic death today is a stark reminder of the dangers they face and the sacrifices they make. We are forever grateful for that service and the courage with which it is rendered.”

– Flags flown on the Pentagon Reservation have been lowered to half-staff in honor of Gonzalez.

– The suspect was identified by multiple law enforcement officials as 27-year-old Austin William Lanz of Georgia.

– Lanz had enlisted in the U.S. Marine Corps in October 2012 but was “administratively separated” less than a month later and never earned the title Marine, the Corps said in a statement.

– Lanz was arrested in April in Cobb County, Georgia, on criminal trespassing and burglary charges, according to online court records. The same day, a separate criminal case was filed against Lanz with six additional charges, including two counts of aggravated battery on police, a count of making a terrorist threat and a charge for rioting in a penal institution, the records show.