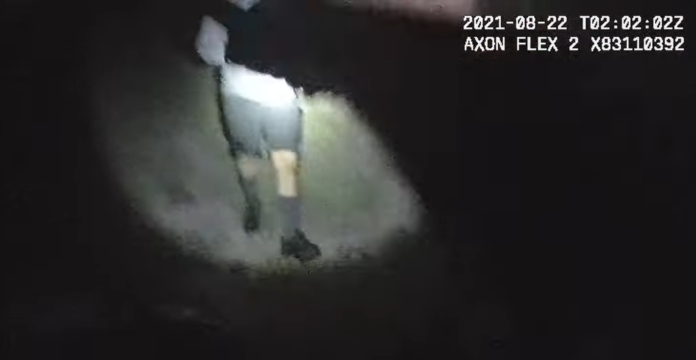 
Deltona, FLORIDA – Deputies monitoring a Deltona neighborhood for a prowler who exposed himself to a woman last week caught him Saturday night with his pants down outside her bedroom window.

Francisco Javier Orozco Gutierrez, 37, of Deltona, was arrested by members of the Deltona Crime Suppression Team after a short foot chase around the corner of the home on Dunlap Drive.

Deputies had been working on the case since Monday’s report of a suspect knocking on the victim’s bedroom window, then exposing himself to her at her sliding glass door. The Sheriff’s Office posted a public safety alert about the incident and detectives canvassed the area, spoke to neighbors and researched sex offenders living in the area, but none matched the description given by the victim.

Around 2 a.m. Wednesday, another resident on nearby Lavilla Street reported someone knocking at the front door. At the scene, deputies found a shoe print that appeared to match a Nike sneaker.

Around 9 p.m. Thursday, deputies responded again to the victim’s home on Dunlap Drive after she reported someone knocking loudly on her rear sliding glass door for several minutes. She was too afraid to look out her windows. A deputy on his way to the scene encountered Orozco on Dunlap Drive, wearing all black athletic clothing and black Nike shoes. Orozco said he’d been working all day and was out for a walk to get some exercise. He became a person of interest in the case.

Deltona CST deputies conducted covert surveillance on the victim’s home Friday night and Saturday night, and around 8:45 p.m. Saturday, they spotted a man peeking inside the window. They watched him transition to another window, then crouch outside of it while looking inside. A deputy noted the suspect had his pants down around his knees, and that his hands were occupied in front of him. The suspect stood up and ran away when challenged, but was apprehended by another deputy seconds later.

Orozco was charged with indecent exposure, voyeurism, stalking, loitering or prowling, and possession of drug paraphernalia after deputies found a crack pipe in the immediate area where Orozco was taken into custody. He was transported to the Volusia County Branch Jail where he remained held Sunday morning on $33,000 bond.

In Las Vegas, a woman gets aggravated with officers’ questions and is sent to a cell to calm down. A END_OF_DOCUMENT_TOKEN_TO_BE_REPLACED

Check out http://rocketmoney.com/law or scan the QR code on the screen to start managing your personal finances END_OF_DOCUMENT_TOKEN_TO_BE_REPLACED