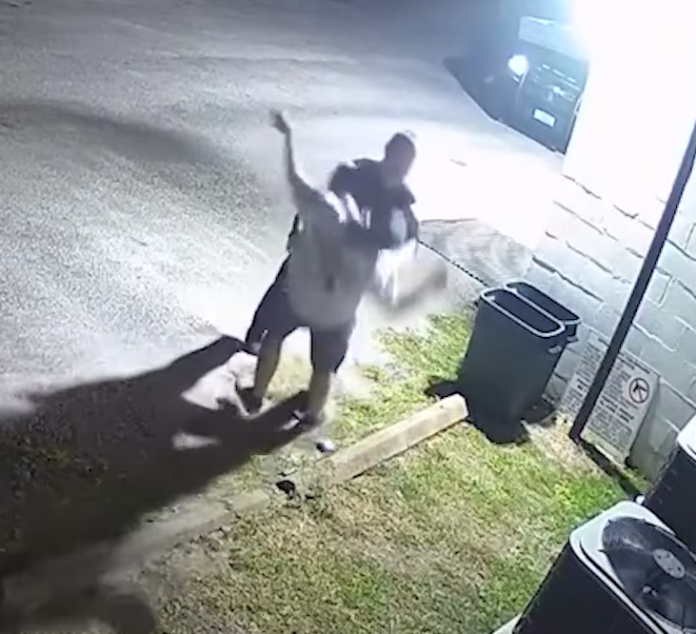 Humble, Texas (Scroll down for video)— The following is a statement from Humble Police Department:

On June 24, 2022, at around 2:30 a.m., Officer John Cox responded to reports of a disturbance at a local bar. Upon arrival, Officer Cox confronted a highly intoxicated man in the parking lot who claimed to have been in a physical altercation with what he described as “two bikers” who began “punching (him) in the face”. The suspect had obvious injuries to his face and head. The suspect then admitted to firing a firearm at least twice at the two men with whom he was fighting. After securing the firearm, Officer Cox moved to detain the suspect, at which point the suspect backed away from the Officer and refused to turn around and put his hands behind his back. Knowing the suspect had admitted to possessing and firing a firearm earlier in the evening, once the suspect continued to attempt to put space between himself and Officer Cox, the Officer pushed the suspect down onto a patch of grass and handcuffed him without further incident.

At no time did the Officer strike the suspect, and it was determined the injuries suffered by the suspect were caused solely by the altercation in which he was involved prior to Officer Cox’s arrival. Officer Cox then spoke to a female witness who stated the suspect also pointed his firearm at her, placing her in fear for her life, after he fired at the two males on the motorcycles. The suspect was charged with aggravated assault based on him threatening serious bodily injury against the female witness by pointing a firearm in her direction and self-admitting to firing a firearm at two individuals. We have reviewed the information for the purpose of launching an inquiry into the incident, but have received no formal complaint from the suspect or anyone else.