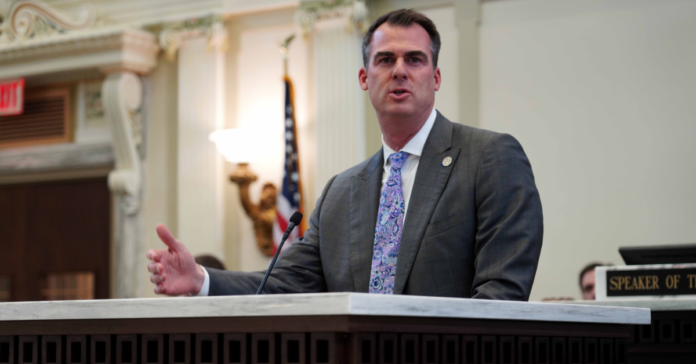 “By signing this bill today we are taking the first step to protect children from permanent gender transition surgeries and therapies. It is wildly inappropriate for taxpayer dollars to be used for condoning, promoting, or performing these types of controversial procedures on healthy children,” said Governor Stitt.

Following members of the Legislature raising concerns about the Roy G. Biv Program at Oklahoma Children’s Hospital, which offers “gender-affirming hormone therapy” and advertises to help “find surgeons who perform gender-affirming surgeries,” according to their website, the hospital has pledged to cease certain gender medicine procedures. Governor Stitt says while that’s good news, it does not go far enough and called for action next legislative session to ban permanent gender transition surgeries and hormone therapies on minors statewide.

Stitt continued: “I am calling for the Legislature to ban all irreversible gender transition surgeries and hormone therapies on minors when they convene next session in February 2023. We cannot turn a blind eye to what’s happening all across our nation, and as governor I will not allow life-altering transition surgeries on minor children in the state of Oklahoma.”

SB 3XX provides nearly $40 million in ARPA funding to increase and expand capacity of behavioral health care for children, as well as $20 million for cancer patients who have been disproportionately impacted by the pandemic, $44 million for electronic health record systems, and over $5 million for mobile dental units.

Office of the Governor