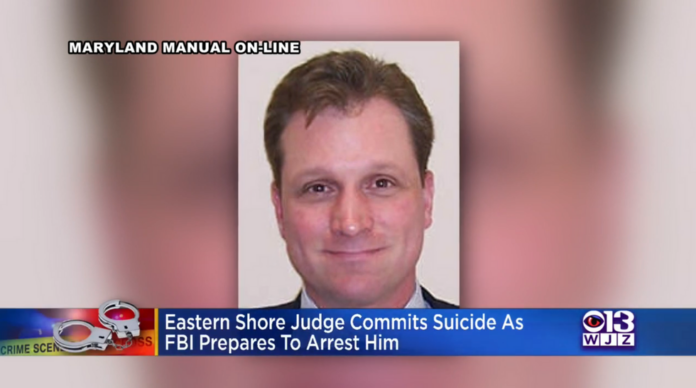 A federal judge in Maryland allegedly killed himself on Friday just moments before FBI agents showed up at his home to arrest him on charges of child sexual abuse.

Caroline County Circuit Judge Jonathan Newell, 50, had been on administrative leave since July while under investigation for allegedly installing a camera in the bathroom of his hunting cabin to capture illicit images of young boys, the Baltimore Sun reported.

Then on Friday morning, having obtained a federal criminal complaint, agents moved in on Newell’s residence to arrest him. But according to a Justice Department news release, when they arrived they found the judge “suffering from an apparent self-inflicted gunshot wound.” Newell was pronounced dead at 6:43 a.m.

Newell’s neighbor reportedly posted images on Facebook showing agents outside his home Friday morning. According to the Sun, she “heard flashbangs and what she believed to be gunshots, and later an ambulance.”

The Baltimore Sun reported that Newell was to be taken into custody on federal charges of sexual exploitation of a child.

The parents of two boys whom Newell had taken on a hunting trip reported to police that the judge not only installed a camera in the bathroom to view them naked but also inspected them for ticks in an inappropriate manner.

“At least two of the males stated they were naked when Newell checked them for ticks — one stated that he moved his own genitalia for Newell to look for ticks, and the other initially did not recall if Newell touched his genitalia, but later stated that Newell once or twice moved the minor’s genitalia to look for ticks,” FBI Special Agent Rachel Corn wrote in the criminal complaint filed Thursday.

The FBI reportedly located a hard drive belonging to Newell that contained numerous videos of young men showering. Footage from the hard drive apparently showed Newell setting the camera up as well as searching a young man’s naked body for ticks.

But in the criminal complaint, prosecutors allege that when authorities approached Newell about the camera, he denied knowledge of it — and then swallowed the camera’s SD card.

Here’s more from the Sun:When confronted by authorities, Newell denied knowledge of a camera, and asked if he could plug his phone into a charger in another room and make some calls. They saw him reach down multiple times, but believed he was holding the phone charger into an outlet. A few moments later, the investigator observed Newell’s right hand closed in a fist and saw him place his fist to his mouth.

A subsequent CT scan reportedly revealed that Newell had ingested a “foreign object,” which prosecutors believe to be the camera’s SD card.