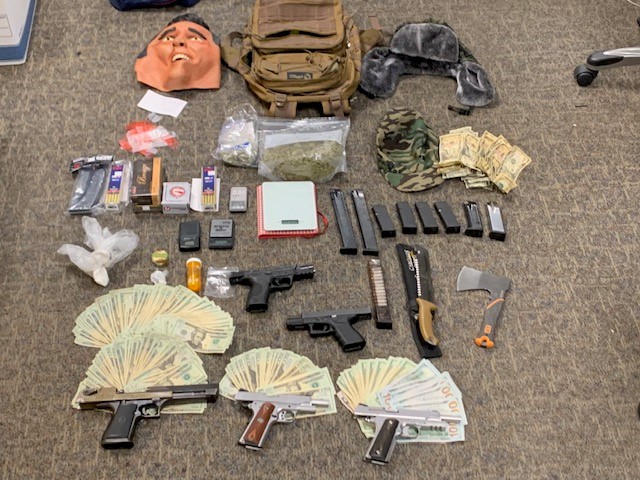 
NASHVILLE – A months-long investigation into the suspected distribution of narcotics, including fentanyl, by Tennessee parolee Ronterius Roberson culminated in Friday’s arrest of Roberson, along with the seizure of guns, drugs, cash, and cars.

During the execution of a search warrant at Roberson’s home on Dabbs Avenue, three additional loaded guns were found in his bedroom. They were seized, along with the Honda Accord, a 2019 Nissan Altima, eight firearm magazines and hundreds of rounds of ammunition. Two of the five guns seized in this case were stolen.

Roberson’s facilitation of first-degree murder and attempted second-degree murder convictions (25-year & 12-year concurrent sentences) stem from 2009 gunfire at a South Nashville apartment complex in which one Madison County man was killed and another wounded. The investigation showed the victims came to Nashville to take part in a drug transaction. Roberson was also from Madison County.

5 Escaped Inmates Chased Down, Arrested at Gunpoint by Ohio Police

A suspect was killed after being involved in two back-to-back shootouts with Arizona police on January 6 and 7. Authorities END_OF_DOCUMENT_TOKEN_TO_BE_REPLACED

A federal judge allowed a wrongful death lawsuit against Kyle Rittenhouse to proceed. Rittenhouse was found not guilty of shooting END_OF_DOCUMENT_TOKEN_TO_BE_REPLACED