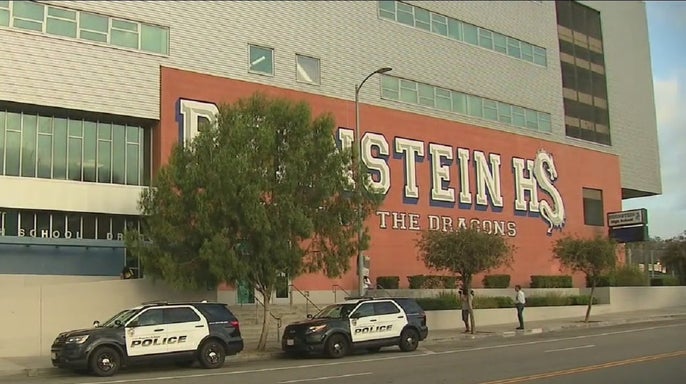 The Los Angeles Unified School District said several students have overdosed on drugs within the past few weeks, the most recent being possibly laced with fentanyl

A 15-year-old Los Angeles high school student has died and another was hospitalized Tuesday night after they overdosed on pills investigators believe were laced with fentanyl.

Parents of two 15-year-old girls became worried when their children didn’t return home from Helen Bernstein High School in Hollywood and they were reported missing.

One stepfather began searching for his child and came to the school where he found one of the girls collapsed in a courtyard.

One of the girls told the parent she purchased what she believed were Percocet pills from nearby Lexington Park and that her friend was in a school restroom. LAPD officers responded to the school at about 9 p.m., authorities said.

When officers went inside the bathroom, they found the female friend unresponsive. She was declared dead by responding paramedics.

The initial victim was taken to the hospital and remains in stable condition.

That same night, LAPD investigators discovered two other people who overdosed on pills that could be connected to the same drug dealer. Both were taken to a hospital.

One was a 17-year-old boy, according to the news outlet.

The Los Angeles Unified School District said Wednesday that six students have overdosed on drugs within the past few weeks.

“We’re going to put the full weight and muscle of this school system, the full weight of the city’s law enforcement community … to know who you are, to know who the people behind you are, and we shall bring justice to the grieving parents,” he said during a Wednesday news conference.

Authorities, including the Drug Enforcement Administration, are investigating the overdoses, Carvalho said. Bernstein High School was open for classes Wednesday, and grief counselors were present, the district said in a statement.

“As we work together with LAPD to uncover the details of this tragic situation, our thoughts and prayers go out to the families and friends of both students,” the statement said.

In Las Vegas, a woman gets aggravated with officers’ questions and is sent to a cell to calm down. A END_OF_DOCUMENT_TOKEN_TO_BE_REPLACED

Check out http://rocketmoney.com/law or scan the QR code on the screen to start managing your personal finances END_OF_DOCUMENT_TOKEN_TO_BE_REPLACED