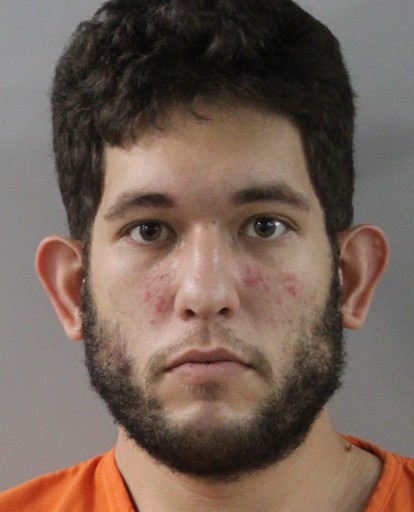 
Detectives from the Special Victims Unit at the Polk County Sheriff’s Office arrested a Hialeah man Monday, August 16, 2021, for traveling to Polk County in order to have sex with a 15-year old girl.

27-year old Erick Rabelo was arrested by detectives as he entered Polk County, after arriving at Orlando International Airport a short time prior.

“The victim’s mom did the right thing by immediately calling us,” said Sheriff Grady Judd. “The detectives working this case were thorough and swift, getting a dangerously twisted man behind bars. This guy is so messed-up that he actually got a tattoo on his forearm with the victim’s name and the date they met on Snapchat.”

Detectives first became involved with this investigation Monday morning after the mother of the victim received a text message at 7:16 AM from Rabelo, introducing himself as the person who was “dating” the victim for a year and three months and claiming that he got her pregnant.

According to the affidavit, the victim said she met Rabelo via the social media app Snapchat on May 16, 2020.

The victim said that Rabelo traveled to Polk County on July 3, 2021 for the purpose of meeting up with her. He rented a room at the State Motel in Haines City, and visited the victim at her home. Once there, he sexually battered the victim against her will.

When he arrived in Orlando, detectives followed the vehicle he was travelling in, and arrested him once inside Polk County.

Rabelo admitted to detectives that he had traveled to Polk County on July 3rd and sexually battered the victim.

He was charged with Sexual Battery (F1), Travel to Meet a Minor (F2), Unlawful Use of 2-Way Communication Device (F3), Use of a Computer to Solicit a Child for Sex (F3), and Aggravated Stalking (F3).

CHILLING VIDEO: Woman Screams For Help While Apparently Being Kidnapped And Forced Into Van Near LA

Woman shot at nearly 50 times, killed while pulling into her garage, cops say

A viewer asked what “mind-blowing” revelations have come out of Alex Murdaugh’s family murder trial since it began. Eric Bland, END_OF_DOCUMENT_TOKEN_TO_BE_REPLACED

In a twist of events, a burglary suspect found himself begging for the help of police after he was shot END_OF_DOCUMENT_TOKEN_TO_BE_REPLACED