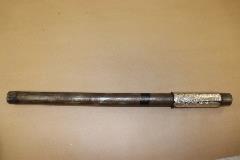 
A Polk County, Florida deputy sheriff investigating a disturbance at the Economy Motor Lodge in Dundee, Florida, was injured when a homemade explosive device concealed on 39-year-old Marco Antonio Tolentino of Dundee was triggered, firing a 12 gauge shotgun buckshot round. The single round struck the deputy’s hand and struck Tolentino in his hand and shoulder. The deputy was transported to the hospital with a serious injury to his hand. Tolentino was also transported and is being treated for non-life-threatening injuries. Both are in stable condition.

Deputies responded to a disturbance call for service on Sunday, August 08, 2021 at approximately 9:30 p.m. to the Economy Motor Lodge in Dundee. Upon arrival on scene, the deputies were directed to a woman who was sitting on a bench at the neighboring motel, the Monticello Motel. The woman had walked to the neighboring motel prior to the arrival of law enforcement.

Another deputy arrived on scene as a backup. Marco Antonio Tolentino, apparently unrel ated to the disturbance call, approached the scene on a bicycle. The deputy began interacting with Tolentino, who was being evasive about who he was and said he did not have identification. During the interaction, the deputy asked the suspect if he had anything illegal on him. At that time, the suspect lifted his shirt exposing a metal pipe which was concealed on the suspect’s person; stating the item was for protection.

A portion of “the pipe” was concealed in the suspect’s right pocket and also extended upwards to the abdomen underneath the shirt. The suspect reached for the pipe and the deputy stopped him; telling him that he would retrieve the item. At this point, the deputy was unsure what the item was, but believed it was some sort of weapon based on the interaction. The deputy reached for the item, at which time the suspect also again reached for the item, and also was trying to pull away from him. At that time, the pipe (which is also known as a zip gun or improvised firearm) came apart as it was pulled from the pocket and then a “blast” went off.

Tolentino later told deputies that he had “a tube” with a 12 gauge round in his waistband. He said it went off while being removed. He told deputies he carries “the tube” for protection stated that he made “the tube” himself. He does not have a concealed carry license.

The destructive device has two inter-locking pieces of metal pipe that hold a single shotgun shell. When pressed together, the device is designed to fire the single projectile. The device contained a single spent 12 gauge round (Winchester- 00 buck shot). During a search of Tolentino’s room, additional shotgun rounds of the same nature were located and recovered. Only one shot was fired. No deputies fired any weapons.

Tolentino is in custody in an area hospital. He is in stable condition.