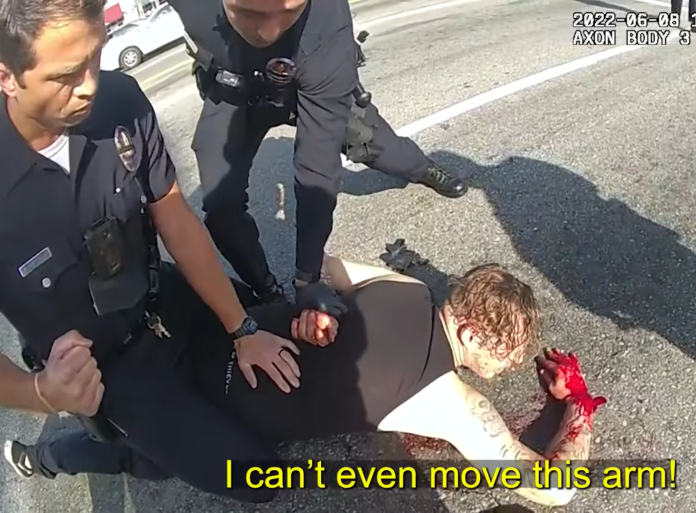 On June 8, 2022, around 4:00 p.m., Hollywood Division patrol officers responded to a radio call of three burglary suspects at a residence in the 2000 block of Paramount Drive. When officers arrived at scene they detained two suspects while the third suspect fled on foot. A perimeter was established, and a description of the outstanding suspect was broadcast.

The suspect, later identified as 27-year-old Anthony Huapaya, a resident of Los Angeles, was subsequently taken into custody and transported to the hospital for non-life-threatening gunshot wounds to the arm. He was treated and absentee booked.

Huapaya’s loaded 9mm Polymer 80 Ghost Gun was recovered at scene and will be booked as evidence. No officers or bystanders were injured during the incident.

LAPD’s specialized Force Investigation Division responded to the scene and interviewed witnesses and supervised the collection of evidence by the Forensic Science Division.

The complete investigation will be reviewed by the Chief of Police, the Board of Police Commissioners, and the Office of the Inspector General to determine the thoroughness and accuracy of the investigation and whether the use of deadly force complied with LAPD’s policies and procedures. Additionally, the Los Angeles County District Attorney’s Office who responded to the scene will review the subsequent FID investigation, evidence collected, and witness statements to determine if the force used by the officer was reasonable.

California police are searching for 16-year-old Kiely Rodni after she disappeared after a large party over the weekend. Plus, a END_OF_DOCUMENT_TOKEN_TO_BE_REPLACED