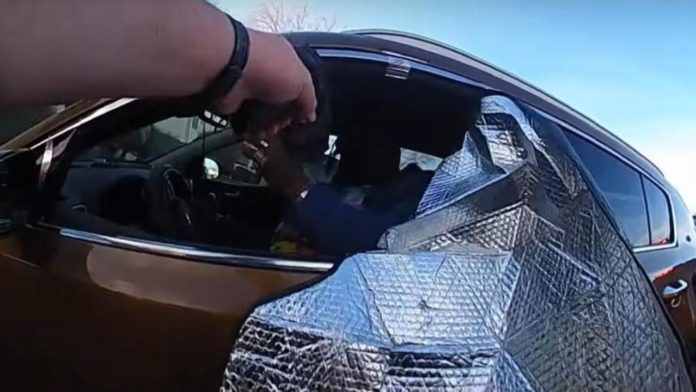 Denver, Colorado — On March 3, 2022, while on patrol, Deputy Daniel Willmont with the Arapahoe County Sheriff’s Office received a citizen request to investigate a suspicious vehicle. Deputy Willmont learned the suspicious vehicle had been reported stolen and called for assistance. Once on scene, the deputies contacted the suspect, who was sitting in the driver’s seat of the stolen vehicle, a brown Kia Sportage SUV. The deputies announced themselves and attempted to obtain the suspect’s voluntary surrender, but the suspect failed to comply with the deputies’ commands to show both of his hands.

The suspect then placed the stolen vehicle into reverse and hit the patrol vehicle where Deputy Willmont was positioned. As the stolen vehicle reversed, Deputy Foley deployed his taser through the driver’s side window and Deputy Willmont fired his agency-issued rifle through the rear window of the stolen vehicle. The suspect then placed the vehicle into drive. Once the vehicle came to a stop, the deputies removed the suspect, secured him and rendered emergency aid after determining he had suffered a single gunshot wound to the back. Deputies requested fire rescue and advanced life support resources but the suspect, 30-year-old Jamarian McGhee, was pronounced dead at the scene. A weapon was also recovered from the suspect.

Darrell Brooks Says He’ll Tell the Jury Whatever He Wants

A suspect was killed after being involved in two back-to-back shootouts with Arizona police on January 6 and 7. Authorities END_OF_DOCUMENT_TOKEN_TO_BE_REPLACED

A federal judge allowed a wrongful death lawsuit against Kyle Rittenhouse to proceed. Rittenhouse was found not guilty of shooting END_OF_DOCUMENT_TOKEN_TO_BE_REPLACED