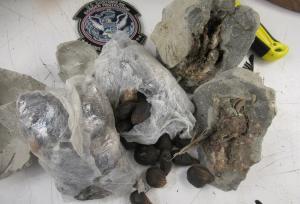 
On Saturday, October 8, 2022, U.S. Customs and Border Protection (CBP) Agriculture Specialists in Memphis, Tennessee seized two bird carcasses and palm seeds encased in cement statues. The shipment from Mexico City was enroute to Odessa, Texas and vaguely manifested as a gift to a cousin “with crafts.” The 10-kilogram shipment was examined via x-ray and contained three cement statues, each concealing organic material.

Upon breaking open the statues, two rotted bird carcasses and 0.6 kilograms of suspected Elaeis Guineensis seeds were discovered encased inside. The seeds are from African palm trees, and the small birds were unidentifiable based on their decomposition. No documentation for the organic material accompanied the shipment.

“To my knowledge, many of these types of “crafts” are belief-based,” said Acting Memphis Area Port Director Michael Johnson. “The Yoruba, Santería or Osha religions use them, and are meant for luck, or for curses. The cement statues were decorated with puka shells and contained the palm seeds and the carcasses. Whether the shipments make sense or not, we vigilantly intercept all contraband and other prohibited items to safeguard the American public. Hopefully our steam sterilization cleared away any bad spirits they may have drawn in.”

On a typical day in fiscal year 2021, CBP discovered 264 pests at U.S. ports of entry and 2,548 materials for quarantine: plant, meat, animal byproduct, and soil.