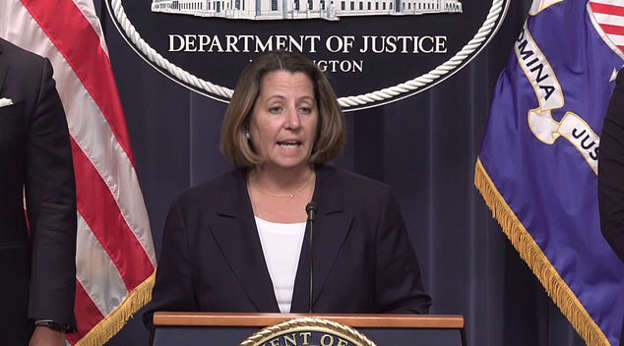 
WASHINGTON – The founder and majority owner of a cryptocurrency exchange, Bitzlato Ltd. (Bitzlato), was arrested last night in Miami for his alleged operation of a money transmitting business that transported and transmitted illicit funds and that failed to meet U.S. regulatory safeguards, including anti-money laundering requirements.

Anatoly Legkodymov, 40, a Russian national who resides in Shenzhen, People’s Republic of China, is scheduled to be arraigned this afternoon in the U.S. District Court for the Southern District of Florida. French authorities and the U.S. Department of the Treasury’s Financial Crimes Enforcement Network (FinCEN) are taking concurrent enforcement actions.

“Today the Department of Justice dealt a significant blow to the cryptocrime ecosystem,” said Deputy Attorney General Lisa O. Monaco. “Overnight, the Department worked with key partners here and abroad to disrupt Bitzlato, the China-based money laundering engine that fueled a high-tech axis of cryptocrime, and to arrest its founder, Russian national Anatoly Legkodymov. Today’s actions send the clear message: whether you break our laws from China or Europe – or abuse our financial system from a tropical island – you can expect to answer for your crimes inside a United States courtroom.”

“As alleged, the defendant helped operate a cryptocurrency exchange that failed to implement required anti-money laundering safeguards and enabled criminals to profit from their wrongdoing, including ransomware and drug trafficking,” said Assistant Attorney General Kenneth A. Polite, Jr. of the Justice Department’s Criminal Division. “The National Cryptocurrency Enforcement Team’s tremendous efforts to disrupt Bitzlato and arrest the defendant demonstrate that we will continue to work with our partners – both foreign and domestic – to combat cryptocurrency-fueled crimes, even if they transcend international borders.”

According to court documents, Legkodymov is a senior executive and the majority shareholder of Bitzlato, a Hong Kong-registered cryptocurrency exchange that operates globally. Bitzlato has marketed itself as requiring minimal identification from its users, specifying that “neither selfies nor passports [are] required.” On occasions when Bitzlato did direct users to submit identifying information, it repeatedly allowed them to provide information belonging to “straw man” registrants.

“Institutions that trade in cryptocurrency are not above the law and their owners are not beyond our reach,” said U.S. Attorney Breon Peace for the Eastern District of New York. “As alleged, Bitzlato sold itself to criminals as a no-questions-asked cryptocurrency exchange, and reaped hundreds of millions of dollars’ worth of deposits as a result. The defendant is now paying the price for the malign role that his company played in the cryptocurrency ecosystem.”

As a result of these deficient know-your-customer (KYC) procedures, Bitzlato allegedly became a haven for criminal proceeds and funds intended for use in criminal activity. Bitzlato’s largest counterparty in cryptocurrency transactions was Hydra Market (Hydra), an anonymous, illicit online marketplace for narcotics, stolen financial information, fraudulent identification documents, and money laundering services that was the largest and longest running darknet market in the world. Hydra users exchanged more than $700 million in cryptocurrency with Bitzlato, either directly or through intermediaries, until Hydra was shuttered by U.S. and German law enforcement in April 2022. Bitzlato also received more than $15 million in ransomware proceeds.

“The FBI will continue to pursue actors who attempt to mask their criminal activity behind keyboards and use means such as cryptocurrency to evade law enforcement,” said Associate Deputy Director Brian Turner of the FBI. “We, along with our federal and international partners, will work relentlessly to disrupt and dismantle these types of criminal enterprises. Today’s arrest should serve as a reminder the FBI will impose risk and consequences upon those who engage in these activities.”

“As alleged today, Legkodymov knowingly allowed Bitzlato to become a perceived safe haven for funds used for and resulting from a variety of criminal activities,” said Assistant Director in Charge Michael J. Driscoll of the FBI New York Field Office. “The FBI and our partners remain steadfast in our commitment to keeping cryptocurrency markets – as with any financial market – free from illicit activity. Today’s action should serve as an example of this commitment as Legkodymov will now face the consequences of his actions in our criminal justice system.”

As alleged in the complaint, Bitzlato’s customers routinely used the company’s customer service portal to request support for transactions with Hydra, which Bitzlato often provided, and admitted in chats with Bitzlato personnel that they were trading under assumed identities. Moreover, Legkodymov and Bitzlato’s other managers were aware that Bitzlato’s accounts were rife with illicit activity and that many of its users were registered under others’ identities. For instance, on May 29, 2019, Legkodymov used Bitzlato’s internal chat system to write to a colleague that Bitzlato’s users were “known to be crooks,” using others’ identity documents to register their accounts. Legkodymov was repeatedly warned by colleagues that Bitzlato’s customer base consisted of “addicts who buy drugs at [] Hydra” and “drug traffickers,” with one senior executive even stressing that Bitzlato should combat drug dealers only “nominally,” to avoid hurting the company’s bottom line. An internal spreadsheet saved in Bitzlato’s shared management folder encapsulated the company’s view of itself: “Positives: No KYC. . . . Negatives: Dirty money. . . .”

As alleged in the complaint, although Bitzlato claimed not to accept users from the United States, it did substantial business with U.S.-based customers, and its customer service representatives repeatedly advised users that they could transfer funds from U.S. financial institutions. Moreover, Legkodymov – who himself administered Bitzlato from Miami in 2022 and 2023 – received reports reflecting substantial traffic to Bitzlato’s website from U.S.-based Internet Protocol addresses, including over 250 million such visits in July 2022.

Legkodymov is charged with conducting an unlicensed money transmitting business. If convicted, he faces a maximum penalty of five years in prison.

In addition, the Treasury Department’s FinCEN announced an Order pursuant to section 9714(a) of the Combating Russian Money Laundering Act, as amended, identifying Bitzlato as a “primary money laundering concern” in connection to Russian illicit finance. The order imposes a special measure prohibiting certain transmittals of funds involving Bitzlato by any covered financial institution.

A suspect was killed after being involved in two back-to-back shootouts with Arizona police on January 6 and 7. Authorities END_OF_DOCUMENT_TOKEN_TO_BE_REPLACED

A federal judge allowed a wrongful death lawsuit against Kyle Rittenhouse to proceed. Rittenhouse was found not guilty of shooting END_OF_DOCUMENT_TOKEN_TO_BE_REPLACED