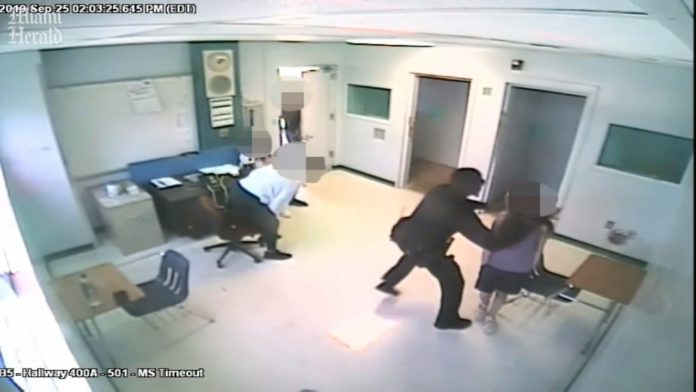 “For more than two and half years, my administration and I have deliberately focused on establishing a high organizational expectation of professionalism, performance and a firm culture of accountability.

Effective Aug. 11, former Deputy Willard Miller is terminated from employment with the Broward Sheriff’s Office for his egregious lack of control, discipline and numerous policy violations. His action and behavior are not reflective of the great work and self-discipline frequently displayed by the overwhelming majority of my deputies.

I’ve personally committed to this community that there will be a zero-tolerance policy against such abuse of powers, and my commitment is unwavering,” Sheriff Gregory Tony said.

The incident occurred approximately 2 p.m. on September 25 at Cross Creek School, located at 1010 N.W. 31st Ave. in Pompano Beach. Deputy Miller is seen on Broward County Public Schools (BCPS) surveillance video grabbing a 15-year-old female student by the neck and slamming her to the ground. The girl is seen pressing her foot on the back of Miller’s leg before he assaulted her.

Miller was charged with one count of child abuse, a felony. He is still awaiting trial

RAW VIDEO: 3 Nashville Officers Shoot, Kill Man Who Charged At Them With Knife This Morning

Nearly three weeks after the Idaho student murders shocked the college town of Moscow, investigators have backtracked on some of END_OF_DOCUMENT_TOKEN_TO_BE_REPLACED