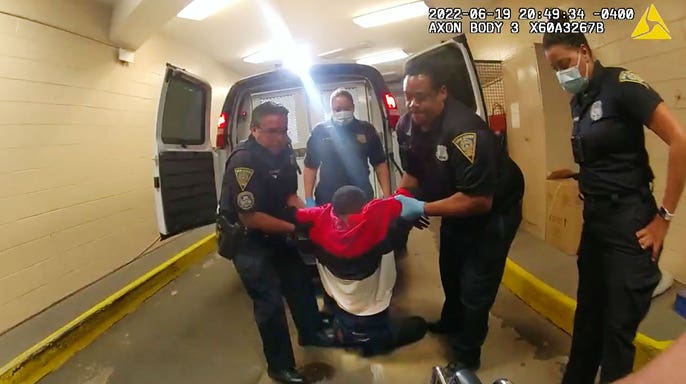 After being paralyzed in the back of a police van in 2015, Randy Cox is still struggling with injuries

The family of a Black Connecticut man who was paralyzed in June when a police van without seatbelts braked suddenly said Thursday that he is back in the hospital.

Randy Cox, 36, was being driven to a police station in New Haven on June 19 for processing on a weapons charge when the driver braked hard to avoid a collision, causing Cox to fly headfirst into the wall of the van, police said.

His family said Thursday that Cox recently had his respirator and feeding tube removed, and that he had been rehabilitating at home and even posted video on Facebook about his recovery. But a few days ago, he fell ill with a fever and was returned to the hospital, they said. He was feeling better Thursday and talking to family members, they said.

“It’s been really horrible on him at this point, dealing with the situation,” Latoya Boomer, Cox’s sister, said during a news conference in New Haven. “At this point, he can’t even scratch his hair if it’s itching. He can’t wipe his eyes if he’s crying. He has no use of his hands. He has a little bit of use of his arms, no movement from the chest down.”

Cox’s attorneys said the medical setback led them to delay filing a federal civil rights lawsuit, but that barring a settlement, they would do so within the next 10 days. The suit will name as defendants the officers involved in his transport and the city of New Haven, the said.

Cox’s supporters say the police mocked his cries for help after he was injured, and accused him of being drunk and faking his injuries. Police video shows the officers dragged him by his feet from the van and placed him in a holding cell at the police department before paramedics finally took him to a hospital.

Five officers were placed on administrative leave following the incident. The city also announced a series of police reforms stemming from the case, including eliminating the use of police vans for most prisoner transports and using marked police vehicles instead. They also require officers to immediately call for an ambulance to respond to their location if the prisoner requests or appears to need medical aid.

Crump said the city’s mayor and police chief have met with Cox.

“The mayor and the police chief, you all have the ability to do the right thing by Randy Cox and I pray that you will,” Crump said. “If not, this family is prepared to go all the way.”