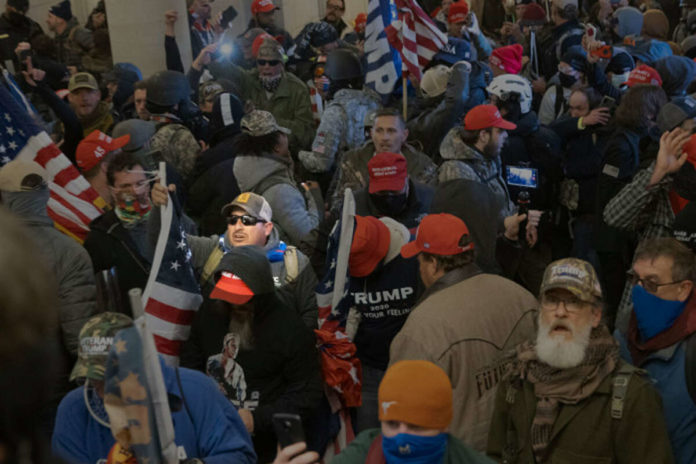 
WASHINGTON — A California man pleaded guilty today to a felony charge for his actions during the breach of the U.S. Capitol on Jan. 6, 2021. His actions and the actions of others disrupted a joint session of the U.S. Congress that was in the process of ascertaining and counting the electoral votes related to the presidential election.

Andrew Alan Hernandez, 45, of Riverside, California, pleaded guilty in the District of Columbia to aiding and abetting in the obstruction of an official proceeding.

According to court documents, on Jan. 6, 2021, Hernandez attended a rally on the Ellipse and then marched to the Capitol. He was carrying a backpack and U.S. flag on a pole with a camera attached. Hernandez initially stood by a series of bicycle racks, set up to keep people from illegally entering the Capitol grounds. While he was there, at approximately 1:59 p.m., the mob pushed down the barricades and moved forward. Hernandez moved past the barricades and made his way up the steps leading to the East Plaza, part of a crowd pushing towards the Rotunda Door.

Hernandez was arrested on Feb. 25, 2021, in Riverside, California. He is to be sentenced on Jan. 27, 2023. He faces a statutory maximum of 20 years in prison and potential financial penalties. A federal district court judge will determine any sentence after considering the U.S. Sentencing Guidelines and other statutory factors.

The case is being investigated by the FBI’s Los Angeles and Washington Field Offices. Valuable assistance was provided by the Metropolitan Police Department and the U.S. Capitol Police.

In the 20 months since Jan. 6, 2021, more than 870 individuals have been arrested in nearly all 50 states for crimes related to the breach of the U.S. Capitol, including over 265 individuals charged with assaulting or impeding law enforcement. The investigation remains ongoing.

Woman Guilty of Faking Kidnapping Breaks Down During Police Interrogation