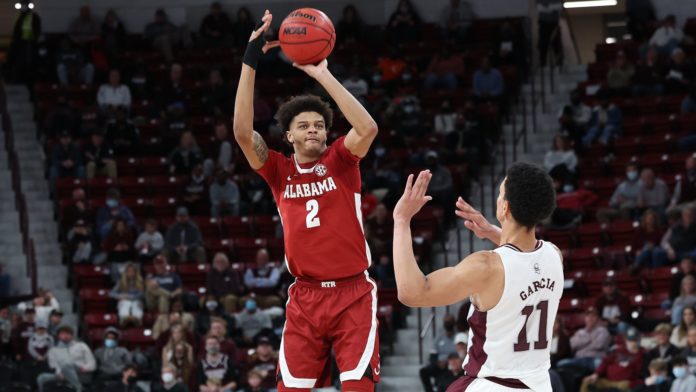 
University of Alabama basketball player Darius Miles, 21, and Michael Lynn Davis, 20, have been charged with capital murder in the predawn shooting death of Jamea Jonae Harris, 23, on the Strip in Tuscaloosa.

Miles, who was ruled out for the season due to an ankle injury on Saturday, was seen crying during a perp walk and said “I love you” several times to someone standing outside the Tuscaloosa County Jail.

Both Miles and Davis, who are from Washington D.C. and Maryland respectively, are charged in the killing of Harris, a resident of Birmingham.

The shooting occurred around 1:45 a.m. on Sunday in the 400 Block of Grace Street. The driver of the vehicle that Harris was found in reported that their vehicle had been struck by gunfire and that they had returned fire in self-defense, which may have struck a suspect, AL.com reported.

“It appears at this time that the shooting was the result of a minor argument that occurred between the victims and suspects after they encountered each other along the strip,’’ Tuscaloosa Violent Crimes Capt. Jack Kennedy told


AL.com. “The member agencies of the Violent Crimes Unit utilized all their resources and worked together flawlessly to bring this case to a resolution in a rapid manner.”

A viewer asked what “mind-blowing” revelations have come out of Alex Murdaugh’s family murder trial since it began. Eric Bland, END_OF_DOCUMENT_TOKEN_TO_BE_REPLACED

In a twist of events, a burglary suspect found himself begging for the help of police after he was shot END_OF_DOCUMENT_TOKEN_TO_BE_REPLACED