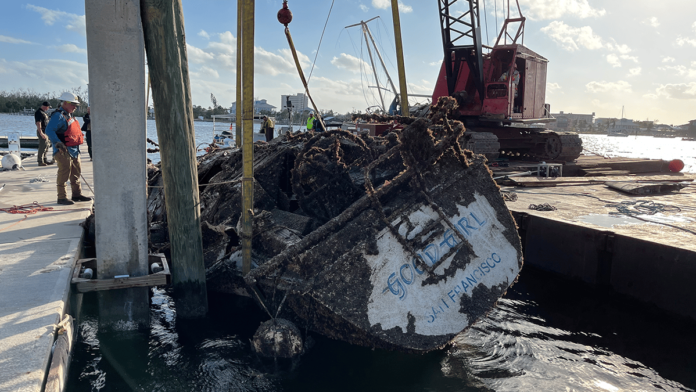 
FORT MYERS, Fla. – The remains of James “Denny” Hurst, a 72-year-old man who was reported missing after Hurricane Ian hit Florida’s Gulf Coast last year, have been found in a sunken sailboat, according to the Lee County Sheriff’s Office.

Hurst had been on board the sailboat “Good Girl” when the storm hit in late September.

The remains of another missing person, 82-year-old Ilonka Knes, were also found in the area. Both Hurst and Knes were the last remaining missing people in Lee County after the hurricane.

Update to the human remains found on the “Good Girl” sailboat behind Salty Sams on Fort Myers Beach on Friday:

The remains have been positively identified as James Denny Hurst. Mr. Hurst’s family has been notified. Our thoughts and prayers are with his family.

The discovery of their remains bring the total confirmed deaths from Hurricane Ian in Florida to 145, with additional deaths reported in North Carolina, Virginia, and Cuba.

An inmate goes on a rampage when he suspects police officers lost his money. Officers have a tough time with END_OF_DOCUMENT_TOKEN_TO_BE_REPLACED

Andrew Tate and his brother, Tristan, are still being detained by Romanian authorities as they conduct their investigation into allegations END_OF_DOCUMENT_TOKEN_TO_BE_REPLACED

Prosecutors motioned the court to allow key testimony from witnesses who may have knowledge of Alex Murdaugh’s past crimes. The END_OF_DOCUMENT_TOKEN_TO_BE_REPLACED