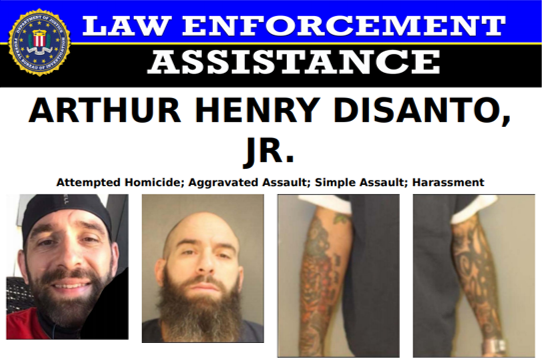 
WASHINGTON TOWNSHIP, N.J. – Charges have been filed against Arthur Disanto, 41, of Delaware County, PA, in an August 23rd incident in Gloucester County in which Disanto allegedly exchanged gunfire with police, wounding a police officer, according to Acting Camden County Prosecutor Jill S. Mayer.

Disanto was also wounded during the incident. The police-involved shooting remains under investigation by the Camden County Prosecutor’s Office.

Disanto was wanted for allegedly shooting a woman in Media, PA in July.  On August 23rd, he evaded capture by police in Folcroft, PA and fled to Deptford Township in Gloucester County, NJ.

Members of several Gloucester County Police Departments responded at approximately 7:30 p.m. to a 911 call from a resident reporting a suspicious vehicle parked outside of his residence. Police later located Disanto in a wooded area behind Cape Cod Drive in Washington Township, NJ.

Disanto fled to Barnsboro Road, where he and an officer with the Monroe Township Police Department exchanged gunfire. The officer was shot in the hand and ear.

Disanto then allegedly fired at an officer with the Deptford Township Police Department.

Disanto was shot and wounded in the exchange of gunfire as well.  He was transported to Cooper Medical Center, where he remains in critical but stable condition. His revolver was recovered.

The Monroe Township officer who was shot was treated and released from the hospital.

WPVI reported: According to an arrest affidavit obtained by Action News, the woman told police that Disanto had been staying with her for a few nights, and they were fighting over money and the death of a friend. During the altercation, the woman stated that Disanto became angry and punched her in the face, tasered her and then shot her while in a bedroom, the document stated. The woman sustained a gunshot wound to the hip but survived her injuries.

Disanto was on a motorcycle on the night of August 23 when Pennsylvania troopers tried to stop him in Marple Township. A plainclothes officer in an unmarked police sport utility vehicle later spotted him in Folcroft, but officials said he reached for a gun and then got in the SUV and drove off as the officer retreated behind the vehicle. The officer shot out windows of the fleeing SUV.

Disanto has been charged with the following:

Nearly three weeks after the Idaho student murders shocked the college town of Moscow, investigators have backtracked on some of END_OF_DOCUMENT_TOKEN_TO_BE_REPLACED