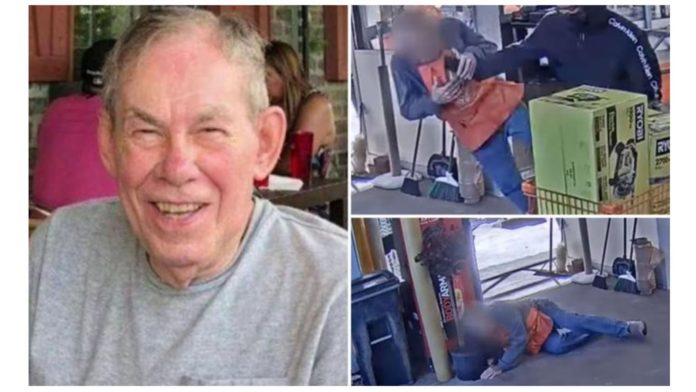 
HILLSBOROUGH, N.C. – Hillsborough police arrested a man in connection with an October 2022 incident involving robbery at The Home Depot in Hillsborough and eventually homicide of an employee who sustained injuries during the event.

Hillsborough Police arrested Terry McAnthony McMillian Jr., 26, of Durham today, Jan. 24, and charged him with first-degree murder and robbery. He was taken into custody in Durham at approximately 7 a.m. and was incarcerated in Orange County Jail. He is being held without bond.

At about 10:40 a.m. Oct. 18, an elderly man employed at The Home Depot was injured by a man committing larceny from the store. The employee, then 82, was injured as the man was leaving the store’s garden area with a shopping cart containing three pressure washers. Surveillance footage released by the store appears to show the man pushing the employee, who then fell to the ground. The employee died Nov. 30, due to complications from the injuries received.

Hillsborough police detectives consulted with the Orange County District Attorney’s Office and received support from the office regarding the charging decision prior to the arrest.

“We are glad we were able to bring some closure to this case and are very appreciative of the family’s patience and support,” Hillsborough Police Chief Duane Hampton said. “This was a team effort involving many of our local criminal justice partners, the SBI and the public.”

An inmate goes on a rampage when he suspects police officers lost his money. Officers have a tough time with END_OF_DOCUMENT_TOKEN_TO_BE_REPLACED

Andrew Tate and his brother, Tristan, are still being detained by Romanian authorities as they conduct their investigation into allegations END_OF_DOCUMENT_TOKEN_TO_BE_REPLACED

Prosecutors motioned the court to allow key testimony from witnesses who may have knowledge of Alex Murdaugh’s past crimes. The END_OF_DOCUMENT_TOKEN_TO_BE_REPLACED