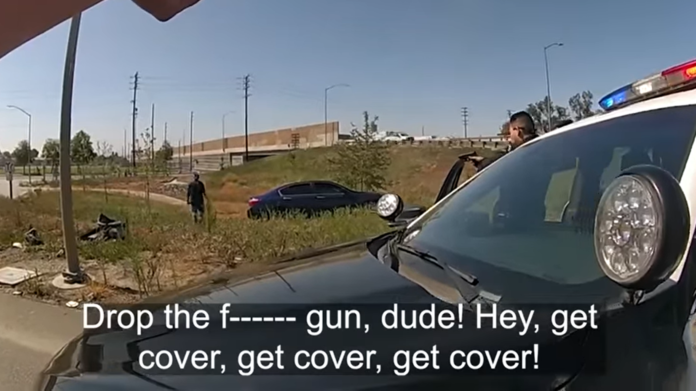 On June 28th, 2021 around 9:58 a.m., LAPD Mission Patrol officers were in the area of Osborne St & Laurel Canyon Blvd. The officers saw a motorist driving recklessly and attempted to pull the vehicle over. The driver fled in his vehicle, resulting in a vehicle pursuit. The motorist drove northbound on the 5 Freeway and exited at the Terra Bella St off-ramp, where he lost control of his vehicle. After the vehicle came to a rest in the dirt section of the off-ramp, the driver exited the vehicle armed with a pistol. The driver pointed the pistol at officers, resulting in an Officer Involved Shooting. The driver was struck by gunfire and transported to a local hospital by Los Angeles Fire Department paramedics where he was pronounced deceased. The driver has been identified as 26-year-old Christopher Mark Garcia.

The pistol used by Garcia was recovered at the scene and booked as evidence. No officers or bystanders were injured during this incident.

LAPD’s specialized Force Investigation Division responded to the scene and interviewed witnesses and supervised the collection of evidence by the Forensic Science Division. A representative from the Office of the Inspector General responded and monitored the scene investigation.

The complete investigation will be reviewed by the Chief of Police, the Board of Police Commissioners, and the Office of the Inspector General.

On this episode of “Prime Crime with Jesse Weber,” he takes us through the bizarre case of Anthony Todt, a END_OF_DOCUMENT_TOKEN_TO_BE_REPLACED

Andrew Tate and his brother, Tristan, were arrested in Romania a month ago for allegations of human trafficking and organized END_OF_DOCUMENT_TOKEN_TO_BE_REPLACED