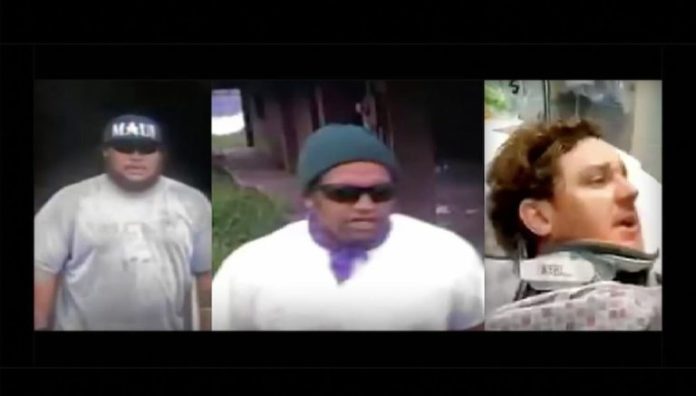 
After a two-week jury trial, a federal jury in Honolulu, Hawaii, found defendants Kaulana Alo-Kaonohi, 32, and Levi Aki Jr., 33, guilty of a hate crime for their racially motivated attacks on C.K., a white man who was attempting to move into their Native Hawaiian neighborhood of Kahakuloa on Maui.

“This verdict brings justice and vindication to the victim, a man who was assaulted and nearly killed simply based on the color of his skin,” said Assistant Attorney General Kristen Clarke of the Justice Department’s Civil Rights Division. “The jury’s verdict – and in fact this whole prosecution – reflects the Department of Justice’s commitment to protecting every person in this country from race-based violence, regardless of the race of the perpetrator or the victim. The law applies equally to everyone.”

“The defendants in this case committed a gruesome attack on the victim because of his race,” said Assistant Director Luis Quesada of the FBI’s Criminal Investigative Division. “The FBI and our law enforcement partners will work to bring to justice anyone who uses threats and violence to intimidate any individual because of racial bias.”

At trial, the evidence showed that C.K., purchased a house in Kahakuloa and decided to move there with his wife and three daughters after his wife was diagnosed with multiple sclerosis and forced to retire. When C.K. arrived in Kahakuloa, he was h arassed and threatened by various Kahakuloa residents who told him things like, “This is a Hawaiian village. The only thing coming from the outside is the electricity,” and “You don’t even belong in Hawaii.”

On Feb. 13, 2014, when C.K. was unpacking his belongings with his elderly uncle, the defendants, who had never met C.K. before, stormed onto his property and demanded that he pack his things and leave, threatening to “tie [him] up and drag [him]” and make him “go missing” if he did not comply. When C.K. replied that he owned the house, defendant Alo-Kaonohi dragged his index finger along C.K.’s jaw and told him, “Your skin is the wrong f****** color.” Defendant Aki then picked up a roofing shovel and handed it to defendant Alo-Kaonohi, who struck C.K. in the head with it, opening up a bloody wound on the back of C.K.’s head. Later on, after C.K. had already begun packing up his possessions, the defendants attacked him a second time. During that attack, defendant Aki head butted C.K. and struck him in the face with the shovel a second time, giving C.K. a concussion and causing him to lose consciousness. When he came to, the defendants were kicking him in the side—kicks that broke two of his ribs. During the second attack, one of the defendants said, “no white man is ever going to live here.”

“The jury’s verdict confirms that the rule of law serves to protect all persons in our community from vicious assaults, no matter the color of their skin,” said United States Attorney Clare E. Connors for the District of Hawaii. “When people commit violent crimes against someone out of hatred for the victim’s race, the Department of Justice will ensure they face criminal consequences in a court of law.”

“The FBI is committed in protecting individuals from being harmed based on their race,” said FBI Special Agent in Charge Steven Merrill of the FBI Honolulu Field Office. “This case highlights our work to ensure everyone feels safe in their own community without any fear of retribution or violence regardless of their race. The FBI encourages the public to support law enforcement’s efforts to end hate crimes by contacting the FBI at tips.fbi.gov or by calling 1-800-CALL-FBI.”

Sentencing is set for March 2, 2023. The charge on which they were convicted carries a maximum sentence of ten years of imprisonment. Sentences are imposed by a federal district court judge based upon the U.S. Sentencing Guidelines and other statutory factors.

An inmate goes on a rampage when he suspects police officers lost his money. Officers have a tough time with END_OF_DOCUMENT_TOKEN_TO_BE_REPLACED

Andrew Tate and his brother, Tristan, are still being detained by Romanian authorities as they conduct their investigation into allegations END_OF_DOCUMENT_TOKEN_TO_BE_REPLACED

Prosecutors motioned the court to allow key testimony from witnesses who may have knowledge of Alex Murdaugh’s past crimes. The END_OF_DOCUMENT_TOKEN_TO_BE_REPLACED