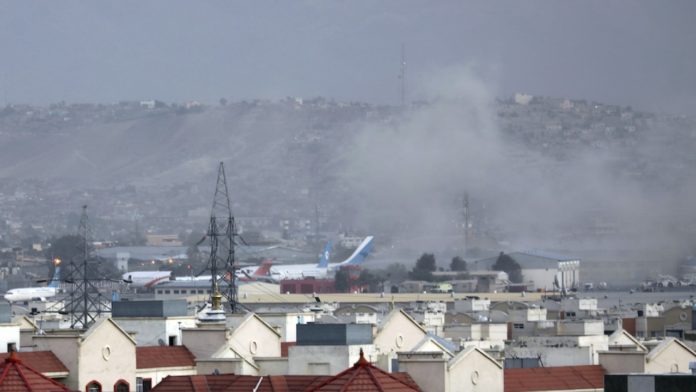 
AFGHANASTAN — Two suicide attacks were carried out outside the crowded Kabul airport on Thursday evening. At least 13 United States servicemembers were killed and others were wounded, according to Fox News. Those killed include 12 Marines and 1 Navy Medic.

The civilian death toll is at least 60 with over 100 wounded. The Islamic State wing known as ‘ISIS-K is believed to be responsible for the attacks.

The first bomb was detonated near the airport’s Abbey Gate and the other near the Baron Hotel. Hours later, witnesses reported a third blast elsewhere in the city.

“We can confirm that the explosion at the Abbey Gate was the result of a complex attack that resulted in a number of US & civilian casualties,” Pentagon spokesman John Kirby wrote in a Tweet. “We can also confirm at least one other explosion at or near the Baron Hotel, a short distance from Abbey Gate.”

Kirby later issued this statement: “We can confirm that a number of U.S. service members were killed in today’s complex attack at Kabul airport. A number of others are being treated for wounds. We also know that a number of Afghans fell victim to this heinous attack. Our thoughts and prayers go out to the loved ones and teammates of all those killed and injured.”

The attacks come a day after officials in Washington urged Americans to leave the area due to a ‘security threat.’

BREAKING: US Embassy in Afghanistan tells Americans at Kabul airport to leave immediately due to ‘security threats’

“U.S. citizens who are at the Abbey Gate, East Gate, or North Gate now should leave immediately.” pic.twitter.com/SNmSG0YZUn

President Biden was briefed as worries grew of more attacks in the area.

NEW: Source briefed on the situation in Kabul tells me “hundreds of ISIS-K in the vicinity, attacks likely to continue”

#Afghanistan: There has been a large explosion at the airport, and there are reports of gunfire. U.S. citizens should avoid traveling to the airport and avoid airport gates. Those at the Abbey Gate, East Gate, or North Gate now should leave immediately. https://t.co/q216Qs8GuB pic.twitter.com/wdd3Rtdbse

We can confirm that the explosion at the Abbey Gate was the result of a complex attack that resulted in a number of US & civilian casualties. We can also confirm at least one other explosion at or near the Baron Hotel, a short distance from Abbey Gate. We will continue to update.

#Breaking
At least 11 people have been killed at an explosion outside Kabul’s airport, @AJEnglish reported, citing #Talibans officials.
Several countries had stopped their evacuation efforts out of #Afghanistan prior to the blast. pic.twitter.com/KQTXmm7YkI

We are awaiting comment from the Pentagon and The White House. Watch live below.