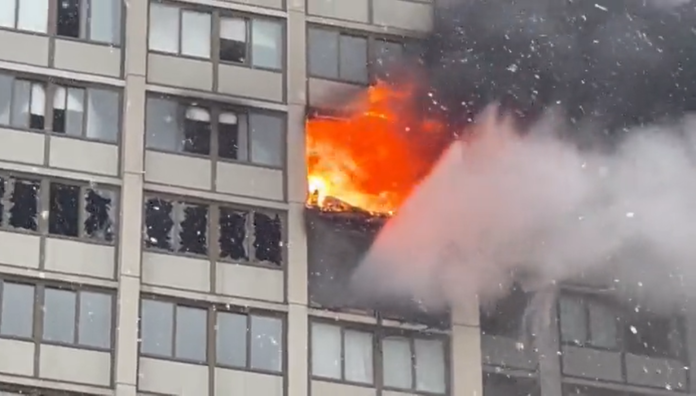 
On Wednesday, a fire broke out in a high-rise apartment building on Chicago’s South Side, causing one death and injuring six others. The fire spread to multiple floors as snow was falling.

Alderman Sophia King stated that the individual who passed away was located in the apartment where the fire is believed to have originated.

The Kenwood neighborhood building suffered damage to at least nine levels, with windows blown out and burn marks around the window frames.

Many of the building’s residents are older individuals, according to King.

An inmate goes on a rampage when he suspects police officers lost his money. Officers have a tough time with END_OF_DOCUMENT_TOKEN_TO_BE_REPLACED

Andrew Tate and his brother, Tristan, are still being detained by Romanian authorities as they conduct their investigation into allegations END_OF_DOCUMENT_TOKEN_TO_BE_REPLACED

Prosecutors motioned the court to allow key testimony from witnesses who may have knowledge of Alex Murdaugh’s past crimes. The END_OF_DOCUMENT_TOKEN_TO_BE_REPLACED