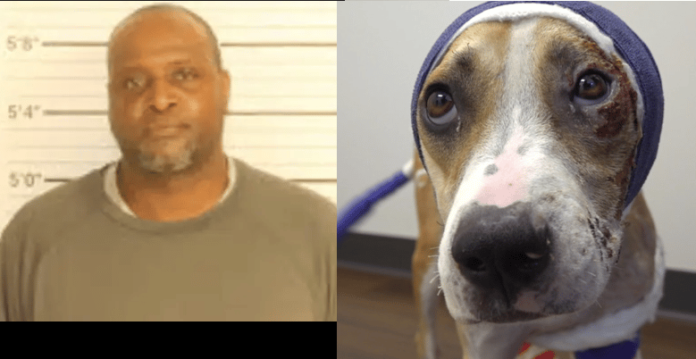 ‘You Can Shoot The Reporter’: Man Accused of Setting Dog on Fire Has Bond Increased After Threat


MEMPHIS, Tenn. – A Nutbush-area man jailed on animal cruelty charges for setting fire to his dog last month saw his bond increased to $150,000 after prosecutors played a tape in court on which he threatened to shoot reporters if they come to his home again, said Shelby County Dist. Atty. Gen. Amy Weirich.

Quishon Brown, 43, remains in the Shelby County Jail on felony counts of aggravated cruelty to animals and setting fire to personal property, and a misdemeanor count of assault.

The one-year-old female dog now known as Riona suffered fourth-degree burns over 60 percent of her body when she was doused with an accelerant and set on fire on June 20.

Brown was arrested on July 12 and when shown photos of the badly burned dog he said “I did good with her.” He told neighbors the previous day that whoever gave a surveillance video of the incident to the police and the media “is going to have their houses burned down.”

His $5,000 bond was revoked on July 22 when the court learned that he had another dog at home, a violation of his b ond conditions. While in jail, Brown discussed his case in a recorded phone conversation with a woman at his home.

She said his address was on social media and that news reporters had knocked on the door, seeking a comment.

Judge Louis Montesi then set Brown’s bond at $150,000. Senior Felony Asst. Bryce Phillips said he will ask for a financial source hearing if Brown produces funds to make the bond.

California police are searching for 16-year-old Kiely Rodni after she disappeared after a large party over the weekend. Plus, a END_OF_DOCUMENT_TOKEN_TO_BE_REPLACED