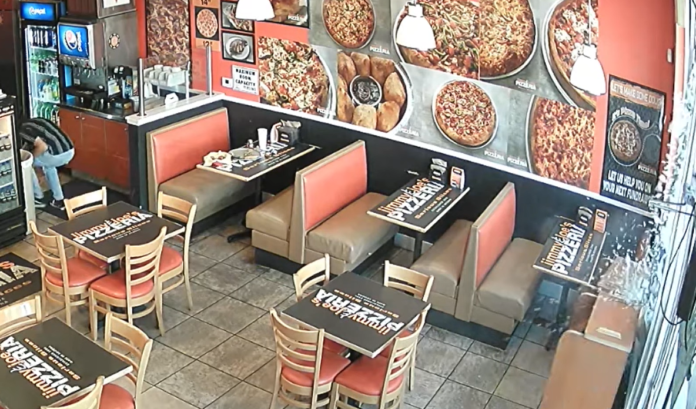 
Mesa, Arizona — On August 21, 2022, Mesa police officers were called to assist the Department of Public Safety with locating a wanted fugitive, 36-year-old Kevin McKinney out of Albuquerque, New Mexico. McKinney was wanted for a homicide that occurred in Albuquerque, on August 20, 2022.

McKinney also had a probation violation warrant in Colorado. Albuquerque Police believe that McKinney was in Mesa, based off of cell phone records which showed him in the area of Dobson and Baseline roads. His vehicle was described as a black 2011 Jeep Patriot, equipped with multiple spotlights and red and blue lights inside to mimic a police car. Just after 3:30 PM detectives spotted McKinney’s vehicle parked outside of a pizzeria on Dobson and Baseline Road. Detectives confirmed that McKinney was sitting inside a cell phone store next to the pizzeria.

McKinney left the wireless store and got into the driver’s seat of his vehicle, that’s what Mesa police officers positioned one of their vehicles at the back of McKinney’s to contain him. Officers shouted for McKinney to exit the vehicle with his hands up. McKinney tried to back up into the police vehicle and that’s when officers fired Les lethal beanbag rounds at his vehicle. McKinney quickly put his car in drive and drove forward, accelerating into the pizza restaurant.

That is when multiple officers shot their Duty weapons. A surveillance video from inside the restaurant shows the vehicle breaking through the front door as three employees and one customer were inside. At the time, none of them were injured. McKinney stopped moving his vehicle and after a short time exited his vehicle. He was taken to the hospital and treated for gunshot wounds. Kevin McKinney faces multiple charges. A revolver and knives were recovered from McKinney’s vehicle.

Nearly three weeks after the Idaho student murders shocked the college town of Moscow, investigators have backtracked on some of END_OF_DOCUMENT_TOKEN_TO_BE_REPLACED