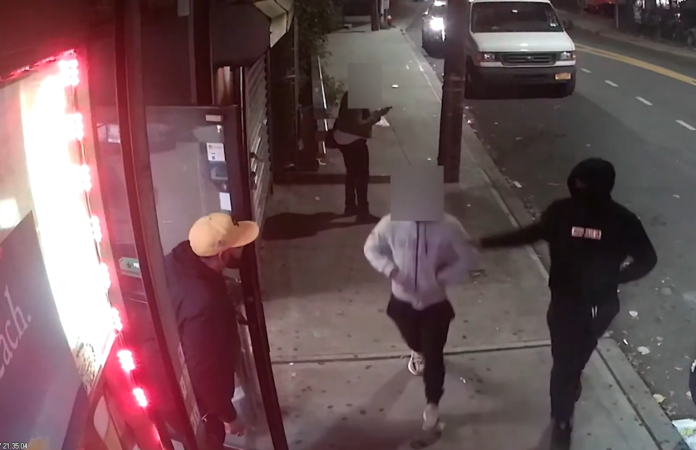 
Yonkers, NY – (Scroll Down For Video) – Now 16-year-old Maliki Johnson was arraigned on Tuesday for the shooting death of a Yonkers resident.

At approximately 9:30 p.m. on Oct. 27, 2020, at the Triangle Deli on Ashburton Avenue in Yonkers, Johnson fatally shot Javon Merrill, 27, at close range. The shooting was captured on video surveillance, and Johnson, who was 15 at the time, was seen fleeing the scene.

Utilizing video surveillance, DNA forensics, and witness interviews, Yonkers Police pieced together the events that transpired that evening and identified Johnson, a resident of Dover, Delaware.

Johnson was apprehended on Aug. 4, 2021, in Delaware, by the Dover Police Department and the United States Marshals Service First State Fugitive Task Force. He was extradited to Westchester County on Monday.

Statement from Yonkers Police: On Tuesday, October 27th, 2020, at approximately 9:35 PM, members of the Yonkers Police Department responded to the Triangle Deli at 286 Ashburton Avenue on a report of a person shot inside the store. Upon arrival officers located an unresponsive male victim down inside the store with an apparent gunshot wound to the chest. First Responders rendered emergency medical aid to the victim; he was transported to a local area hospital where he subsequently died from his injuries. Officers cordoned-off the area and initiated a criminal investigation.

Detectives from the Major Case Squad and Crime Scene Unit responded to the scene, interviewing subjects and witnesses, recovering surveillance video, and processing forensic and ballistic evidence. Investigation yielded that the victim was exiting the deli when he was approached by two suspects outside; one of the suspects produced a handgun and fired one time in the direction of the victim, striking him the chest. The victim collapsed at scene and the two suspects fled the area. Within days investigators developed information as to the identity of the alleged shooter; additionally, evidence was submitted for processing including an article of clothing believed to have been discarded by the suspect – that article of clothing yielded a DNA profile. Over the next several months Detectives worked continuously to enhance the investigation, follow-up leads, and make investigative progress, including matching the DNA profile to the same alleged shooter, identified as a 15-year-old (at the time of the incident) resident of the City of Dover, Delaware with familial ties to the City of Yonkers. Investigators believe that the suspect was visiting the City of Yonkers and may have had associations with local street gangs including the 300 Bloodhound Brims, and that the shooting was the result of an earlier dispute between the victim and those same groups.

“This tragedy highlights the urgent need to address gun violence in our cities, particularly among young people,” Westchester County District Attorney Miriam E. Rocah said. “Not only are friends and family mourning the loss of Mr. Merrill, but another young person’s life has been irrevocably changed because of his own actions that day. We will continue to work with Yonkers Police and our law enforcement partners at the federal, state and local level to try and eradicate gun violence in our neighborhoods.”