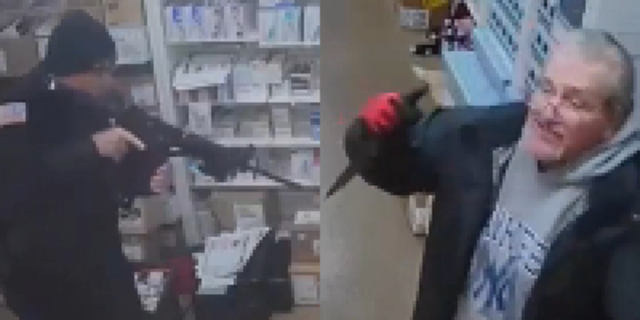 KEANSBURG – The New Jersey Attorney General’s Office has released video footage captured by Tasers and surveillance cameras, related to a fatal police-involved shooting that occurred on Jan. 6 at Keansburg Pharmacy.

Three officers discharged their weapons that killed borough resident James Sutton, 55, who strolled into the back of the pharmacy, took an employee hostage, and stabbed an officer, according to the released footage.

According to surveillance footage from the pharmacy located at 199 Main Street, around 3:20 p.m., Sutton unlocked the door that separates customers from the pharmacists, while holding a large knife. According to 911 calls, Sutton then told everyone to leave but kept an employee there against his will.

The surveillance footage shows Sutton and the hostage in the back of the pharmacy. Sutton has the hostage by the arm as the employee speaks to him about the medication on the shelves.

When officers arrive, Sutton takes the employee by the neck and tries to distance himself from the responding officers. According to police, Sutton was threatening to hurt the employee.

The video shows two failed attempts to subdue the suspect by Taser. Responding officers, with their weapons drawn, repeatedly tell Sutton to drop the knife, but he refuses. One of the officers is stabbed when he gets closer to Sutton in order to control him.

When the officer is stabbed, three officers open fire on Sutton and he falls to the ground immediately. The hostage quickly walks away as officers determine whether Sutton is still a threat

On this episode of “Prime Crime with Jesse Weber,” he takes us through the bizarre case of Anthony Todt, a END_OF_DOCUMENT_TOKEN_TO_BE_REPLACED

Andrew Tate and his brother, Tristan, were arrested in Romania a month ago for allegations of human trafficking and organized END_OF_DOCUMENT_TOKEN_TO_BE_REPLACED